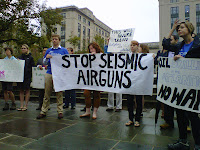 We joined ESC Member Organizations Oceana and The Natural Resources Defense Council for a protest outside the Department of Interior on Tuesday to try to persuade Secretary Salazar that deafening marine species isn’t good policy.

At issue is a proposal under consideration by DOI that would allow oil companies to utilize seismic airguns to attempt to locate pockets of oil deep beneath the ocean’s floor.  These seismic airguns produce blasts in ten-second intervals that can exceed 235 decibels. That is nearly twice as loud as a jet airplane at takeoff. They use these seismic airguns around the clock, for days on end.

You can see in the above USGS image that the blasts produced by these devices travel through the ocean’s depths, through it’s floor, and back up. On the way, they cross any marine life that is in those waters.

Among the impacted species would be migrating loggerhead sea turtles, and highly endangered North Atlantic right whales. There are less than 400 of these whales left on our planet. Whales rely on hearing, or echolocation, to navigate, identify their surroundings, and to communicate. Seismic airguns can disrupt their migration, breeding, and feeding activities if exposed at a distance. They can even cause permanent deafness or death in marine mammals at closer distances.

By the DOI’s own estimates, allowing this seismic testing would injure 138,500 dolphins and whales. As Oceana marine scientist Matthew Huelsenbeck said at the event:

“There is only one word that I can use that sums up this proposal: unacceptable. The levels of impacts to protected dolphins and whales, including critically endangered species like the North Atlantic right whale are simply unacceptable.

Allowing seismic testing to go forward would be a high-stakes gamble with the future of a critically endangered species, and the other marine life it shares the oceans with. In addition, it would put a fishery that supports 200,000 jobs at real risk. All for the mere possibility of finding oil and gas.

Please take action to prevent seismic testing by telling Secretary Salazar that you think we should protect endangered whales–not deafen them with seismic airgun blasts.