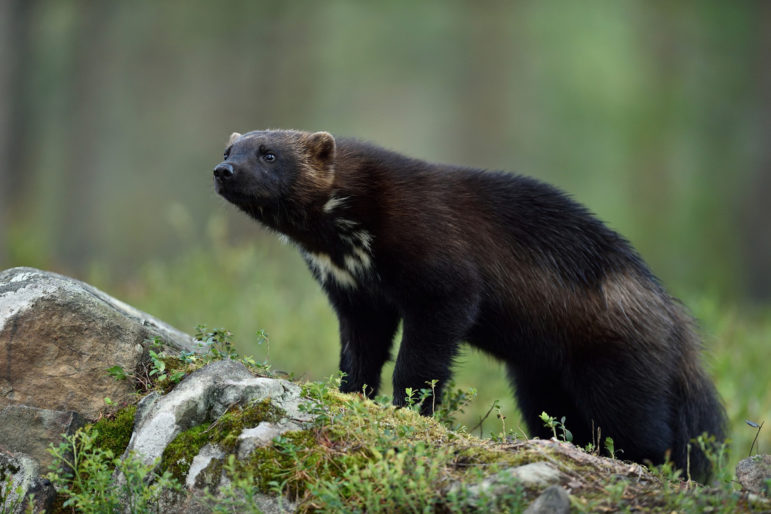 Wolverines are the largest member of the Mustelidae family, which includes carnivorous mammals like weasels, otters, badgers, and ferrets. Their diets vary throughout the seasons. Although they are capable of successfully hunting ungulates, like deer and elk, they will gladly scavenge on the leftover carrion from a wolf kill or hunt smaller prey like ground squirrels and marrots.

Historically, wolverines occupied the higher elevation forests from California all the way to the Great Lakes region. They could have been found in the Rocky Mountains and even as far south as northern Arizona and New Mexico. However, in recent decades their ranges have decreased dramatically and they are now only found in pockets of Washington, Oregon, Idaho, Montana, and Wyoming.

Many factors are contributing to the decline of the wolverine in the US.

The number of wolverines in the lower-48 states is reduced to a perilously low number, an estimated 300 individuals in the contiguous US.  Wolverines in the western US are segmented into subpopulations effectively separated by low valleys, development, and other obstacles. This has resulted in decreased genetic exchange and decreased ability for self-sustaining populations or repopulation of areas that may be suitable for recovery, such as the Southern Rockies and Sierra Nevadas.

Additionally, wolverines rely on snowpack that lasts into late spring to successfully raise their young. For this reason, female wolverines choose the deepest snowpack available for their dens. Climate change is causing a loss of springtime snowpack and this loss will likely accelerate. The result may be further isolation of different populations as the vital alpine habitat becomes restricted more and more to higher elevations.

Human disturbances and trapping are also negatively affecting wolverines. Resource extraction, roads, winter recreation (such as snowmobiling and helicopter skiing), and other disturbances near denning sites negatively impact their ability to reproduce. Trapping also puts wolverines in danger. Trapping is indiscriminate and lethal to any unlucky creature that stumbles upon them. Wolverines can be unintentionally trapped and killed.

Despite this compelling evidence, in October 2020, the US Fish and Wildlife Service (FWS) under the Trump Administration denied protections to the wolverine. This decision was justified by grossly downplaying the projected effects of climate change on snowpack.

In response, a number of Endangered Species Coalition member groups including Earthjustice, the Center for Biological Diversity, Defenders of Wildlife, Idaho Conservation League, and Rocky Mountain Wild have expressed they will be challenging the decision in court. We will continue fighting to protect this incredible species.