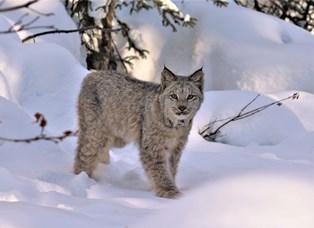 Our Southern Rockies campaign activities stretch into the four corner states of Colorado, Utah, New Mexico, and Arizona. The original inhabitants of these states include the Nations of the Apache, Arapaho, Cheyenne, Shoshone, Ute, Pueblo, Comanche, Navajo, Kiowa, Paiute, Goshute, Hopi, Cocopah, Yavapaiv, O’odham, Hohokam, and more. This diverse region has ecosystems ranging from alpine tundra and mountain forests to sagebrush, prairie, and deserts. There are over 200 listed species that call this unique and beautiful area home.

The Mexican gray wolf, Canada lynx, black-footed ferret, Gunnison sage grouse, greenback cutthroat trout, and the Pima pineapple cactus are some of the endangered species that inhabit the iconic Southwest. Additionally, there are a number of native species here that are in need of Endangered Species Act protections, but have yet to receive them, like the wolverine and the monarch butterfly.

The monarch butterfly is a symbol of rebirth, change, transformation, and hope. To many Mexican Indigenous cultures, monarchs are the souls of deceased loved ones, returning to Earth to provide comfort to their living descendants each year during Dia de los Muertos (Day of the Dead). The monarch inspires ceremonial dances of the Hopi and Cherokee tribes. And the Blackfoot people look to the butterflies for restful sleep and dreams.

Not only do monarchs play an important role as cultural symbols, but they also serve as critical pollinators and contributors to biodiversity. They are considered an indicator species, meaning their presence (or lack thereof) reflects the health of their habitats. They let us know when something is wrong, and right now, they are sending us a clear message.

Habitat loss and fragmentation are the main causes of species decline and extinction worldwide. In the Southern Rockies, we’re no exception. Threats to the wildlife here include climate change, urban expansion, oil and gas extraction, mining, logging, certain types of outdoor recreation, commercial agriculture, and more. Because of these threats, we are working hard to promote strong federal and state-wide policies that protect habitat connectivity and wildlife corridors. In Colorado, we have a team of volunteers, the Western Slope Connectivity Project, educating the public on and advocating for corridors. We are also working with a number of state legislators to pass policies to reduce habitat fragmentation.

Our Work in the Region

In all four states, we are regularly meeting with our US Senators and Congresspeople to ensure that the Endangered Species Act remains one of the strongest environmental laws in the world and that the many species that call this area home remain part of our natural heritage for many generations to come.