Share on facebook
Share on pinterest
Share on twitter
The Obama Administration lifted it’s moratorium on new off shore oil drilling on Tuesday, unveiling what U.S. Department of Interior Secretary Ken Salazar described as the “gold standard” of safety regulations for drilling deeper than 500 feet. The moratorium was enacted May 28, 2010, by DOI in response to safety concerns following the BP Deepwater Horizon incident that released 185 million gallons of oil into Gulf waters. 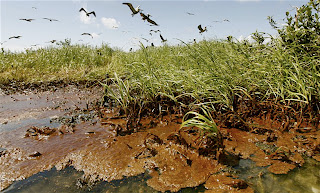 The new regulations, however important, do not address the ongoing threats to wildlife. The premature lifting of the moratorium saw no new attempts to protect the 40+ endangered & threatened species in the Gulf region, where much of the new drilling would occur.
Leda Huta, Executive Director of the Endangered Species Coalition said, “Scientists are just beginning to understand the impact that the oil spill has had to endangered species and other wildlife.  The last spill should have been a very clear lesson to us that we humans are intricately connected to nature.  Prematurely lifting the oil drilling moratorium before we know enough about how to protect wildlife puts all living creatures at risk, including ourselves.”
The moratorium was set to expire November 30th, but the Administration was pressured by industry interests and Members of Congress to lift it sooner. In one such effort, Senator Mary Landrieu (D-LA) blocked the appointment of the White House budget director in protest.
To learn more about the ongoing impacts to Gulf wildlife and what you can do to help, please visit our spill response site Oil Spill: Wildlife Crisis.