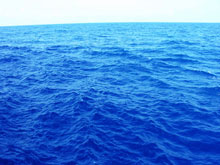 Today is Blog Action Day 2010 (#BAD10 on twitter). The Endangered Species Coalition is honored to be a part this year and we’re excited that change.org is creating a worldwide discussion about water.
If you have not already, please sign the petition in the sidebar to United Nations Secretary Ban Ki Moon urging him to prioritize the Millennium Development Goal to reduce by half the number of people worldwide without access to clean, safe water.
The global water crisis is already impacting species. Loss of freshwater habitat is increasingly a factor in the severe decline in Pacific salmon populations. The lack of sufficient fresh water in California is causing conflicts between farmers and fishermen and nearly led to unprecedented Congressional action that would have overridden the Endangered Species Act.
Against that backdrop, it’s imperative for the survival of marine species that we prioritize maintaining the health of the world’s water.
The Earth’s oceans are increasingly affected by human activities. The United Nations called last year for a global ban on plastic bags to address the accumulation of plastics in our oceans that has led to floating garbage islands, some as big as the state of Texas. Plastic is the most prevalent component of marine debris and is responsible for significant loss of marine life. Endangered sea turtles mistake floating plastic bags for jellyfish due to the similar appearance and movements and subsequently ingest them. A recent United Nations study found that 94% of fulmars in the North Sea had plastics in their stomachs. Endangered monk seals and even sperm whales have been known to swallow the bags and suffocate, drown or starve as a result.
Worldwide efforts to regulate the use of plastic bags have had varying levels of success. China banned them in 2008, reportedly saving millions of barrels of oil and certainly keeping untold amount of plastic out of it’s waterways. Ireland has heavily taxed them and several U.S. cities and states, as well as the District of Columbia, have taken a similar tack.
Offshore oil extraction has of course had the most visible and recent impact on our oceans. The BP Deepwater Horizon blowout in April and ensuing spill dumped an estimated 185 million gallons of crude oil into the Gulf of Mexico. The total loss of marine life directly attributable to the spill is nearly unknowable but thousands of birds, turtles and marine mammals have been found dead or visibly oiled in the months since the spill.
Six of the world’s seven species of sea turtles make their home in the Gulf, all are listed as threatened or endangered. The spill happened during their peak nesting season, likely causing significant loss to future generations as oil fouled the beaches on which the turtles lay their eggs. The turtles were forced to swim through the oil and were at one point being burned alive in careless attempts to dispose of the leaked oil.
As many as 44 endangered or threatened species  remain at risk due to the oil spill. These include a variety of birds such as the brown pelican and piping plover, endangered blue and finback whales, and West Indian Manatees.
The long term effects of the BP spill won’t be known for decades. Using the Exxon Valdez spill in Alaska as an example, we can see that the future is perilous for Gulf species. Oil is still being found in the spill zone decades later, leading to multiple species’ inability to recover.
The spill impacted an already ailing Gulf. A hypoxic area, or “dead zone” of nearly 8000 square miles forms yearly as nitrogen and phosphorous swept into the Mississippi and Atchafalaya is carried into the Gulf. This stimulates excessive algae growth and ensuing oxygen depletion forcing marine life to either flee the area or suffocate. This year’s dead zone was among the largest ever.
Our world and it’s species depend on clean water. It’s vital that we make the sometimes difficult but necessary choices to protect those resources. Safeguarding species and their habitat by protecting our coasts and  waterways not only benefits wildlife but greater society as we depend on some of those same waterways as sources for drinking water.
To find out how you can help, visit our website at stopextinction.org.