Department of Interior Secretary Ken Salazar issued an order last Thursday directing the department and all its bureaus to ensure the scientific integrity of those agencies and protect whistle blowers in the event they should “uncover and report scientific misconduct by career or political staff”. 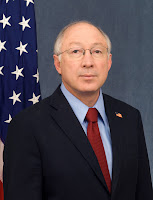 Secretary Salazar stated that the new policy “defines the roles and responsibilities of all department employees, including career staff and political appointees, in upholding principles of scientific integrity and conduct.”
In advocating for an enhanced scientific integrity policy, the Endangered Species Coalition coordinated with our member groups and other scientific and conservation organizations to hold meetings and submit testimony in favor of a robust scientific integrity policy.
Additionally, over 1200 comments were submitted to Secretary Salazar by ESC activists demanding improvements to the policy.
The order takes effect immediately and, assuming it’s followed in spirit, is a win for sound science and for endangered species that have seen decisions made by the department improperly influenced in the past.
We hope the Administration continues to support sound science based policy in the Gulf, Arctic and across the United States.