A Marshall Plan for Nature: How to Protect Endangered Species from Climate Change 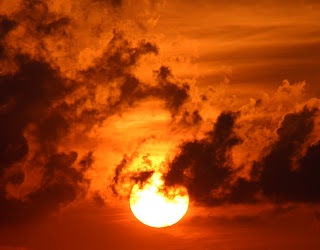 If your house were on fire, what would you save? Where would you even start? What if not just your house, but your whole planet was on fire?

That is the scenario we face today. Climate change has arrived. No longer clouds gathering in the distance, the firestorm is here now–melting titanic glaciers, drying mighty rivers and setting deserts ablaze.

With our new report, It’s Getting Hot Out There: The Top 10 Places to Save for Endangered Species in a Warming World, the Endangered Species Coalition and our member groups attempt to answer the question: To save endangered species from climate change, where do we begin?

Threatened and endangered species, already in a precarious position, are the most vulnerable to additional pressures.  For that reason, the vast and far-reaching impacts of global warming are a game changer for these plants and animals. In one stroke, climate change has introduced a new threat to edge a tremendous number of imperiled species ever closer to extinction.

So, if we are serious about our commitment to save our natural heritage for future generations, our response also must be a game-changer.  We need a Marshall Plan for nature.  The good news is that it is not too late to save endangered species from climate change, but we need to get to work now.

As the co-winner of the Nobel Peace Prize in 2007 (for her contribution to the Intergovernmental Panel on Climate Change), Dr. Jean Brennan, states, “What has been lost in the news over climate change and what this report highlights is that, at this very moment, we have a crucial window of opportunity to save species and ecosystems.  Conservation measures, if taken now, can greatly increase a habitat’s and species’ ability to withstand climate change.  But, we don’t have a minute to spare.”

While many of us are aware that polar bears and Arctic seas are in crisis mode, few of us have heard about the other species and ecosystems arriving at the emergency room door because of climate change.

Our Southwest deserts are home to endangered Sonoran pronghorn antelopes, desert tortoises, kangaroo rats, pupfish, springsnails, and other desert species that are adapted to very specialized niches and therefore particularly vulnerable to changes in climate and habitat.

America’s Greater Everglades shelters threatened and endangered species, such as the Florida panther, manatee, American crocodile, Everglades snail kite, and fragrant prickly apple that are at risk of being submerged as sea levels rise to flood low-lying areas.

Other endangered species havens that must be saved are Hawaii–with the greatest number of threatened and endangered species of all the states, the Gulf Coast–home to more than 40 imperiled species on the front lines of sea level rise, the Snake River Basin–a unique habitat for salmon, bull trout, snails and clams, Greater Yellowstone–our nation’s first national park, the California Bay Delta–important for salmon, sturgeon, steelhead, Swainson’s hawk, and Smith’s blue butterfly among other species and the Sierra Nevada ecosystem–the only habitat for the Sierra Nevada mountain yellow-legged frog, the Yosemite toad, and the Sierra Nevada bighorn sheep.

With so much of our natural heritage at stake, how can we sit back and let it go up in flames?

Obviously, we can’t.  We must act.  And, this report outlines how.

Without question, we must aggressively reduce greenhouse gas pollution.  Many of the ecosystems listed here–such as arctic sea ice and coral reefs–will not be saved without that step.

Additionally, we must exponentially increase existing conservation measures, such as eradicating invasive species, setting aside open space, creating wildlife corridors, and restoring wild lands. We must also head in new directions, such as preventing offshore oil and gas drilling in the Arctic and transforming how we manage California’s water supply.

Whether drawing upon new or standard practices in our conservation toolkit, the urgency is higher than ever. Fortunately, one of the world’s most effective wildlife laws, the U.S. Endangered Species Act, has powerful tools to protect species and their habitat from climate change. We must now invest significantly more in funding, political solutions and hands-on conservation in a massive effort to help ecosystems and species adapt.

By protecting these imperiled species, we will protect ourselves, ensure that our grandchildren have clean water, safeguard our coastal communities from the ravages of increasingly severe storms, and pass down America’s unique natural heritage for future generations.

0 comments on “A Marshall Plan for Nature: How to Protect Endangered Species from Climate Change”