It’s Getting Hot Out There 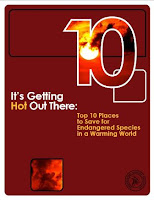 It’s Getting Hot Out There: Top 10 Places to Save for Endangered Species in a Warming World,  focuses on 10 habitats that support endangered species and are impacted by climate change.
The ecosystems featured in It’s Getting Hot Out There are:
1. Arctic Sea Ice, home to the polar bear, Pacific walrus and at least 6 species of seal.
2. Shallow Water Coral Reefs, home to the critically endangered elkhorn and staghorn coral.

3. The Hawaiian Islands, home to more than a dozen imperiled birds and 319 threatened and endangered plants.

6. California Sierra Mountains, home to 30 native species of amphibian, including the Yellow-legged frog.
7. The Snake River Basin, home to four imperiled runs of salmon and steelhead.
8. Greater Yellowstone Ecosystem, home to the imperiled Whitebark pine, an important food source for animals, including the threatened Grizzly bear.
9. The Gulf Coast’s flatlands and wetlands, home to the Piping and Snowy plovers, Mississippi sandhill crane, and several species of sea turtles.
10. The Greater Everglades, home to 67 threatened and endangered species, including the manatee and the red cockcaded woodpecker.
Leda Huta, ESC’s Executive Director said of the report, “Climate change is no longer a distant threat on the horizon, it has arrived and is threatening ecosystems that we all depend upon, and our endangered species are particularly vulnerable. If we are serious about saving endangered species from global warming, then these are the places to start.”
The 10 habitats were chosen by nominations from Coalition members, with the submitted areas then reviewed and judged by a panel of scientists. For each ecosystem, the report identifies some of the endangered species that live there, in addition to climate change threats and needed conservation measures.

According to the Intergovernmental Panel on Climate Change (IPCC), up to 30 percent of the world’s species will face a greater risk of extinction if global temperature increases exceed 3 to 5° F above pre-industrial levels. .

“To help protect and restore endangered species, our nation must address the impacts global warming is already having and clean up the sources of global warming pollution—both nationally and internationally,” said Huta. “We owe it to our children and grandchildren to be good stewards and protect endangered species and the places they call home.”
The full report, in addition to steps you can take to help wildlife survive climate change, is available online at itsgettinghotoutthere.org

0 comments on “It’s Getting Hot Out There”