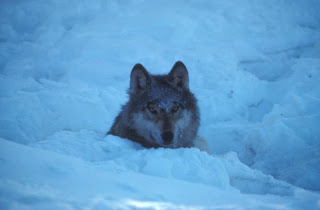 On Monday, the Montana Department of Fish, Wildlife and Parks (FWP) wrapped up the public comment period on its proposed expansion of wolf hunting. The public had been asked to comment on a proposal to increase the hunting quota this year, as well as some changes to the hunting regulations. The Department is considering three options for a quota: 153, 186 or 216 wolves, all which would represent a significant increase over the 2009 quota of 75 wolves. (According to FWP there are at least 525 wolves currently living in the state.)

Some of the proposed regulations slightly increase protection for wolves, such as a proposal for a 5-day waiting period between purchase of a wolf hunting license and the use of that license. (Last year, someone allegedly shot a wolf illegally, drove back to town and bought a hunting license, then went back out to retrieve the wolf.)

The Endangered Species Coalition hopes that many people commented to FWP, and urged them to manage wolves as native wildlife with important ecological value, rather than as pests to be reduced to minimum numbers.

The second event this week occurred in U.S. District Court in Missoula, where environmental groups (including several ESC member groups) argued their case for reinstating endangered species protection for wolves in the N. Rockies. Approximately 50-100 anti-wolf protesters gathered outside the courthouse to voice their support for keeping wolves off the Endangered Species list and continuing to allow Montana and Idaho to manage wolves.The is expected to issue a ruling some time this year.

Finally, I was interviewed for television news story that aired last week on KECI, the NBC affiliate in Missoula, Montana.