Washington, DC – Wildlife and plant trafficking and unsustainable wildlife trade is a multi-billion-dollar industry and a major threat to species in the U.S. and worldwide, according to a report released today by the Endangered Species Coalition. The report, Trafficked: 10 Species Threatened by the Wildlife Trade, highlights how legal and illegal commerce in rare plants and wildlife is driving species decline, and in some cases, posing a threat to human health. 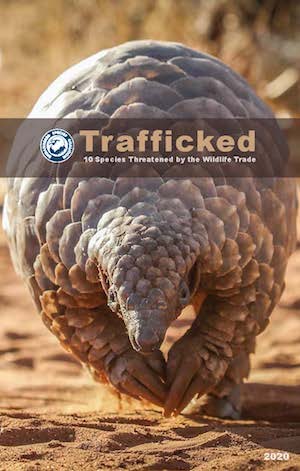 Several of the species in the report are part of the global pet trade, such as the yellow-headed parrot and the Tokay gecko. Others are sought for food or medicinal properties, including the Scalloped hammerhead shark, pinto abalone and the pangolin – a scaly, armadillo-like creature, thought to be involved in the transmission of the novel coronavirus. Still others are coveted as “collectables,” including the Venus flytrap and the rufous hummingbird. The Diamondback terrapin of the U.S. Gulf Coast is trapped and traded for pets and food. Wildlife trade is one of the leading causes of the extinction crisis we are experiencing according to the IPBES Global Assessment Report.

“Wildlife trafficking and trade is a multi-billion-dollar industry that threatens fish, plants and wildlife, as well as human communities,” said Leda Huta, executive director of the Endangered Species Coalition. “We need governments and leaders around the world to commit to ending wildlife trade and trafficking, while developing alternative, sustainable economic opportunities for communities.”

The Wildlife Trade and Infectious Diseases

Scientists believe that the novel coronavirus now sweeping the planet, COVID-19, jumped from wildlife to humans, quite possibly via a pangolin – the most trafficked mammal in the world and one of the ten species featured in the report. Similarly, SARS, Ebola and HIV all likely originated from the exploitation of wildlife. In fact, the vast majority of new infectious diseases that have emerged in recent years are “zoonotic” diseases, and climate change is exacerbating the threat. In order to protect human health and prevent more pandemics, the report calls for new policies, enforcement, and a commitment to end wildlife trafficking and unsustainable wildlife trade. Some members of Congress have started work to address wildlife trafficking, including Senators John Cornyn and Cory Booker, who have crafted the bipartisan Preventing Future Pandemics Act of 2020. The bill would prohibit the sale of live wild animals for food – thought to be the cause of COVID-19 – but has yet to be heard in committee.

10 Species Threatened by the Wildlife Trade:

Endangered Species Coalition’s member groups nominated species for the report. A committee of distinguished scientists reviewed the nominations and chose the finalists. The full report, along with photos can be viewed and downloaded here: https://www.endangered.org/campaigns/annual-top-ten-report/trafficked. The Endangered Species Coalition produces a Top 10 report annually, focusing on a different theme each year. Previous years’ reports are also available on the Coalition’s website.

2 comments on “Trafficked: 10 Species Threatened by the Wildlife Trade”