The Sage-Grouse, a Symbol of the West, Needs a Real Conservation Plan 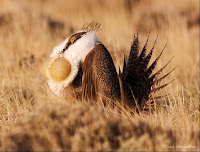 Once numbering in the millions, sage-grouse have been decimated by decades of loss of sagebrush habitat to development, which in recent years has increasingly included oil and gas development.

On February 26, 2010, the U.S. Fish and Wildlife Service is scheduled to announce its determination of whether or not the greater sage-grouse (Centrocercus urophasianus) warrants protection under the Endangered Species Act. At issue is an iconic bird that was once abundant throughout the West but is now gone from nearly half of its original range.
The greater sage-grouse is the largest of the grouse species in North America, and they depend entirely on sagebrush habitat, as it provides food, shelter, and protection from predators.
Over the past decade, oil and gas development has boomed across the west. Recent studies have confirmed that oil and gas drilling activities are disturbing sage-grouse breeding and nesting sites and leading to population declines in Wyoming, Colorado, Utah, and other Western states. The U.S. Fish and Wildlife Service estimated that sage-grouse populations have declined between 69 and 99 percent from historic levels. While oil and gas drilling may be one of the more predominant causes of the sage grouse decline, threats also include destruction of sagebrush habitat due to sprawl, agricultural conversion, and wildfire. Almost half of the area identified as potential sagebrush habitat in 1970 is not occupied by sagebrush now. Biologists see the plight of the sage-grouse as a warning that balance needs to be restored to sagebrush landscapes across the West.
Western states, fish and wildlife agency experts, and federal land managers have been concerned about the status of sage-grouse for many years. In addition to numerous statewide conservation plans, rangewide conservation plans have been produced by the Western Association of Fish and Wildlife Agencies (WAFWA) and by the Bureau of Land Management (BLM), which manages the majority of remaining sage-grouse habitat in many states. Despite these efforts, population declines have continued, and the U.S. Fish and Wildlife Service (USFWS) studied the bird for the last year to determine whether or not it warrants Endangered Species Act protection. Regardless of how it is accomplished, recovery of the species will be a long and difficult process in a sagebrush ecosystem now fragmented by many uses.
This sagebrush ecosystem contains some of the most important pronghorn, elk and mule deer habitat in the West, as well as the home range for dozens of other wildlife species. For many, the character of the West itself is at stake. In areas like northwest Colorado, where the largest and most important population of sage-grouse in the state are found, the imperiled bird shares its home with some of the largest elk and mule deer herds in North America. Hunting tags for elk and mule in Moffat County are some of the most sought after in the nation and hunting and fishing alone contribute $30 million annually to the local economy.

The Fish and Wildlife Service decision due in February is the result of a court order to fix a
prior decision that had been manipulated by a political appointee in the Bush-era Interior Department. In order to demonstrate their decision will be based on science, not politics, the Fish and Wildlife Service has delayed their decision to incorporate the results of scientific research that was made available late in 2009. This research confirms many of the concerns previously expressed about the impacts of oil and gas development and other threats on the species and documents significant sage-grouse population declines across the species’ range.
Regardless of particular opinions about the efficacy of Endangered Species Act protection versus other ways to conserve sage-grouse, a wide cross-section of Westerners and decision makers, from rural landowners and local conservationists to federal land managers and elected officials, agree that the West needs an effective plan for conserving sage-grouse in place in order to preserve a vital piece of our natural heritage and an important fiber in the very fabric of our Western landscape.

2 comments on “The Sage-Grouse, a Symbol of the West, Needs a Real Conservation Plan”