The four hundred mile long, sixty mile wide Sierra Nevada Ecosystem is historically one of our nation’s most resilient ecosystems. This majestic landscape was treasured by our 26th President, Teddy Roosevelt, and inspired John Muir to help found America’s modern conservation movement.
The aptly named “Range of Light” has survived clearcuts of it’s forests, encroaching development of all sorts,the impacts of rapid population growth and changing land use–all while maintaining one of the world’s most diverse ecosystems.
Roughly 570 vertebrate species inhabit the Sierra Nevada Ecosystem. In addition, the  few are escaping the impacts of it’s greatest threat to date.
Climate change is causing the Sierra Nevada Ecosystem to rapidly warm. Increased winter rains instead of snow are causing an earlier snowmelt and less snowpack, critcal to the ongoing survival of numerous species.
The decline in snowpack and resultant snowmelt has been calamitous for amphibious species such as yellow-legged frogs. The frog relies on the snowpack to provide enough water to keep ponds from freezing in winter and drying in summer. The disappearing snowmelt has confined the frogs to a mere 7 percent of their range. 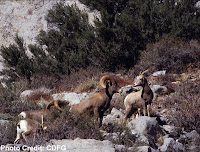 The majestic Sierra Nevada bighorn sheep is suffering as tree lines move higher in warmer weather, depleting it’s mountain meadow habitat. Sierra Nevada bighorns had come back from the brink of extinction, numbering barely more than 100 in 1995. It was the first species to be listed under the Endangered Species Act this century and, while slowly recovering, is highly vulnerable to climate change wrought habitat loss.
The American pika, a hamster-like species with a very small temperature window, has already become locally extinct in some lowlying areas as a result of climate change. Unable to withstand the increased temperatures in the summer and lacking vital snowpack for its insulative properties, the pika are pushed further upslope–a terminal destination.
The lack of snow melt is taking a toll on salmon runs in mountain streams as well. Many of California’s threatened and endangered fish depend on rivers that start in the Sierra Nevada Ecosystem. As the headwaters decrease and temperatures rise, endangered fish species such as the Delta smelt will suffer the result.
Again, the Sierra Nevada Ecosystem is one of our nation’s most resilient and enduring landscapes. With the initiation of mitigation and adaptation strategies, the ecosystem will once again thrive.
Reducing or eliminating external impacts such as invasive species, logging, excessive grazing,and mining are essential. Landscape efforts including the restoration of mountain meadows will aid in the recovery of endangered species such as the Sierra Nevada bighorn and contribute to a healthier, more resilient ecosystem.
Lastly, global climate change must be addressed on the national and international level. Without binding limits on the amounts of carbon released into the atmosphere, the planet’s surface will continue on a warming path leading to increased devastation of wild places and the species that depend upon them.

To find out more about climate change and it’s effect on endangered and threatened species and what you can do to help, please visit the ESC website at www.stopextinction.org.