Shoot Down Polar Bear Trophy Hunts and Other Radical Proposals

Share on facebook
Share on pinterest
Share on twitter
This post is a guest blog from Michael Markarian, President of the Humane Society Legislative Fund.
As early as next week, the U.S. House of Representatives may consider H.R. 4089, the so-called “Sportsmen’s Heritage Act of 2012,” a highly controversial omnibus bill that combines several radical hunting proposals into one awful package. Among other things, the legislation seeks to allow importation of polar bear trophies taken in sport hunts in Canada; mandate that the Department of Interior and the U.S. Forest Service open nearly all federal public lands to hunting without regard to the impact on wildlife and other resources; and strip the Environmental Protection Agency of its ability to regulate toxic lead. Each one of these component parts would warrant our vigorous opposition, but to combine all of them into one package, is a disgrace and the House should reject it.
The measure would undermine several current federal wildlife protection and environmental laws, further imperil already threatened species and the environment, and undermine federal agencies’ ability to carry out their wildlife and public lands management obligations.  I want to demonstrate why this bill, in all of its component parts, is such a disaster: 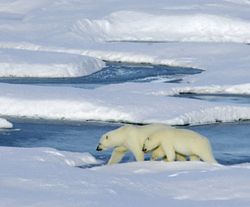 Second, H.R. 4089 would allow import of polar bear trophies taken in Canada and only from bears hunted from approved populations before the May 2008 Endangered Species Act listing took effect. In practice, it would treat trophy hunters who killed their bears before the ESA listing took effect as though the listing had never taken effect. The trophy hunting community was aware that the ESA listing would take place for over 16 months prior to its effective date, and trophy hunters were repeatedly warned by federal agencies and hunting associations that the final listing would cut off imports immediately. These individuals knowingly assumed the risk that their trophies might not be approved for importation, and allowing them to import those trophies now would constitute an unfair bailout.

The MMPA prohibits the sport hunting of polar bears in the U.S. and it prohibits the import of any marine mammal, including dolphins, whales, seals, sea lions, and walruses. The law should be consistently applied, and we should not have a special carve-out for a few trophy hunters who shot polar bears in Canada, knowing full well that they may not be able to import the trophies under U.S. law. While some argue this is just a small number of trophies, it encourages hunters to continue killing protected species in other countries, store the trophies in warehouses, and simply wait for their allies in Congress to get them a waiver on the imports. It sets a dangerous precedent, and encourages more killing of threatened species and protected marine mammals, which flies in the face of the ESA and MMPA.

H.R. 4089 would also exempt all federal agency decisions concerning recreational hunting or shooting activities from environmental review under the National Environmental Policy Act. No analysis of the impacts of these activities to target and non-target wildlife, habitats, or any other aspect of the environment would be permitted. These provisions of H.R. 4089 are entirely antithetical to the science-based principles of sound wildlife and federal lands management.

H.R. 4089 explicitly requires federal agencies to facilitate recreational hunting opportunities on all federal lands. This will raise serious safety concerns, and create significant conflicts with the non-consumptive activities, such as hiking and wildlife watching, of other public lands visitors who contribute significantly more to the U.S. economy than hunters. If H.R. 4089 passes, virtually every decision by federal agencies to restrict hunting and shooting activities would be subject to expensive lawsuits as to whether the decision is “necessary and reasonable.”

There are millions of acres of federal lands currently open to sport hunters who have the opportunity to participate in recreational hunting on many national wildlife refuges, national forests, and other federal properties. The activities mandated in H.R. 4089 are already disproportionately favored against the interests of other larger outdoor user-groups.

LEAD AMMUNITION: H.R. 4089 would also eliminate the jurisdiction of the U.S. Environmental Protection Agency to regulate ammunition, under the Toxic Substances Control Act. The U.S. Fish and Wildlife Service has already banned the use of lead ammunition for waterfowl hunting—a policy which has been in place for more than two decades yet waterfowl hunting still thrives in this country due to the many forms of non-toxic ammunition available—and the National Park Service prohibits the use of lead ammunition by agency staff and contractors, with both agencies’ decisions being based on the known deleterious effects of lead. Such decisions should be left to the discretion of federal agencies based solely on the best available science on the impacts of toxic substances such as lead.

This omnibus measure includes several highly controversial pieces of legislation that would severely roll back federal conservation laws and set a dangerous precedent for the management of wildlife and the environment. Please call your U.S. Representative today at (202) 225-3121, and follow up with an email, asking him or her to vote “No” on H.R. 4089.
___

This post originally appeared on Animals & Politics, a blog by the Humane Society Legislative Fund.