Proposal Threatens to Lower the Bar on Northwest Forest Protection

Share on facebook
Share on pinterest
Share on twitter
This is a guest blog post by Steve Holmer, Senior Policy Advisor for the American Bird Conservancy.
The Obama administration has unveiled a draft critical habitat proposal for the Northern Spotted Owl which the public may comment on until June 6. The proposal marks a significant departure from the standards and guidelines of the Northwest Forest Plan, weakens habitat protection for the threatened owl, and does not reflect the best available science.
The draft critical habitat rule notes that the Northwest Forest Plan “…has been successful in the conservation and recruitment of late-successional forest and associated species on Federal lands (Thomas et al. 2006. P. 283) (p.52), but then proceeds to recommend its dismantling based on two main justifications, that commercial timber harvest from matrix lands was insufficient, and the lack of active restoration in areas that may contain “uncharacteristically high risk of severe fire,” or in moist forests where early seral habitats are lacking.
A number of recent studies and timber sale data raise serious questions about these justifications. The final Northwest Forest Plan was a political compromise that under-delivered on old-growth protection by placing 42% of the remaining acres in the matrix, and overpromised on timber volume. The plan’s billion board foot estimate was never realistic because it is predicated on logging old-growth, which is not supported by the public and that in practical terms has generally been ruled in violation of wildlife protection laws. The estimate was also completed prior to the designation of the riparian reserve network which turned out larger than anticipated. The Bush Administration recognized these factors to a degree, and lowered the estimate to 800 million board feet.
A look at timber sale output in the Northwest Forest Plan region reveals the agency is at a sustainable level and meeting the volume targets budgeted by Congress. Since 2003, the budget approved by Congress and the Administration has called for 4,668 million board feet from the Northwest Forest Plan area. The agencies have offered 4,507 board feet, or 96% of the planned budget. In addition, exports from the region are skyrocketing. In 2010 over 2 billion board feet of logs and lumber were exported from the West Coast. In 2011 it topped 3 billion. There is no shortage of logging in the Pacific Northwest.
While early- seral habitats are desirable for some species, logging is not the best means to establish early-seral habitat. We recommend that agency utilize natural disturbances. Simply refraining from post-fire logging has the potential to create abundant high-quality early-successional habitats.  It is not acceptable to convert nesting, roosting, and foraging habitat of the Northern Spotted Owl to early-seral. Under the Northwest Forest Plan restoration of owl habitat, when it occurs, should hasten creation of owl habitat, not set it back by many decades.  This provision is unrelated to owl recovery or sound forest management and should be removed from the final designation.
Active Management in Critical Habitat
The draft Critical Habitat rule includes extensive language supporting active management in all areas of owl Critical Habitat, including regeneration harvest in moist Westside forests.  The draft goes so far as to suggest that forest management goals can take precedence over owl conservation, and that the conservation of this endangered species must be “compatible with broader landscape management goals”:
This approach has raised the concern of Society for Conservation Biology, The Wildlife Society, and American Ornithologists’ Union who wrote:

“These proposed policy changes have the potential to adversely impact federal lands in the Pacific Northwest to the detriment of spotted owls and other federally threatened and endangered species….we are especially concerned about the potential habitat impacts of adopting untested “active management” forestry technique.”

The groups are asking the Department of the Interior to prepare an Environmental Impact Statement to prepare a scientific approach to test active management forestry’s impact on spotted owl prior to being used at a commercial or landscape scale.
Adverse Modification of Habitat
The draft Critical Habitat rule further states that if projects have considered ecological forestry principles, that in general these activities would not be considered adverse modification of owl habitat by FWS. As a result of this provision, the normal protections provided by critical habitat to address adverse modification may not apply at the discretion of FWS.
Presidential Memorandum
President Barack Obama issued a memorandum to Secretary of the Interior Ken Salazar stating that logging should be allowed and considered an acceptable practice in all owl Critical Habitat.

Importantly, the proposed rule recommends, on the basis of extensive scientific analysis, that areas identified as critical habitat should be subject to active management, including logging, in order to produce the variety of stands of trees required for healthy forests. The proposal rejects the traditional view that land managers should take a “hands off” approach to forest habitat in order to promote species health; on-going logging activity may be needed to enhance forest resilience.

“We are concerned that this memorandum overstates the quality and quantity of scientific research on the potential benefits of active forest management, especially in the Pacific Northwest on a federally threatened species. In particular, we are unaware of any substantial or significant scientific literature that demonstrates that active forest management enhances the recovery of spotted owls.”
Changes are needed to modify the draft as follows: 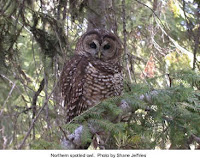