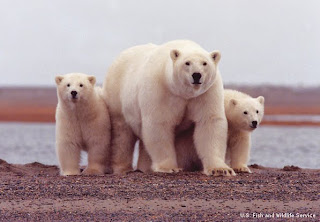 The recently released Presidential Report on Climate Change addresses the significant risk to several species of climate change related population loss or extinction. Among the most vulnerable is the polar bear.The report projects that two thirds of the world’s polar bears could be gone by 2050 and there could be no wild polar bears in Alaska by 2085 unless immediate action is taken to address climate change.

According to the White House report Global Climate Change Impacts in the United States, “about two-thirds of the world’s polar bears are projected to be gone by the middle of this century. It is projected that there will be no wild polar bears left in in 75 years.”

As the polar bear depends on sea ice for hunting and foraging, any ice loss effect them immediately and adversely. NASA has found that perennial sea ice is melting at a rate of 9% per decade and could disappear entirely within the century. Without sufficient sea ice on which to hunt, the bears are faced with few good options. They can either turn inland to forage and face the consequences of human interaction or confront the likelihood of starvation or drowning.

Climate change effects polar bears by impacting their prey species as well. Less snow can result in inadequate snow cover for seals to construct birth lairs, reducing seal reproductivity and by extension, the ability of polar bears to sustain themselves and their cubs.

Warming temperatures also effect the ability of female polar bears to give birth to and raise their young. Bears build dens in dense snow pack to hibernate several months a year and to give birth to cubs. Warmer temperatures mean less snow in which to build dens and the possibility of den collapse or decreased insulative properties, resulting in lower litter survival rates. The cubs, who are born weighing only 1 pound, may quickly freeze to death or be crushed by collapsing ice.

There are some international cooperative efforts already underway to maintain polar bear populations. The International Union for Conservation of Nature Polar Bear Specialist Group (PBSG) was formed in 1965 when representatives from , , , the and met in to address polar bear conservation due to concern that populations were being over harvested. Members of the PBSG signed an agreement in 1973 to plan for the protection of the polar bear by mandating national research programs relating to the conservation and management of the species. The PBSG most recently met June 29th-July 3rd and once again recognized that the greatest threat currently facing polar bears is climate change.

The polar bear is one of many of species that is already being impacted by climate change. The report finds that “Climate change is already having impacts on animal and plant species throughout the .” Wildlife, birds, fish and plants are going to need lots of help to adapt to a changing world.

With the American Clean Energy and Security Act (HR 2454) on its way to the Senate after passing in the House, and the U.N. Climate Change Conference coming up in December, the opportunity to effect change may never be better. An enforceable and bold annual reduction in carbon pollutants emitted into the atmosphere, as could happen under strong global warming legislation, would slow or stop the melting of sea ice and keep the polar bear from going extinct. That will require more agreement and initiative to confront the issue than has been previously shown in the Senate and on the international stage.

You can help by calling your Senators and asking them to support a climate bill with full wildlife adaptation funding intact. You can send a letter to your Senator and you can reach the United States Capitol switchboard at (202) 224-3121. To learn more about safeguarding endangered species in a warming world please visit the Endangered Species Coalition’s website at www.stopextinction.org.