A few of us from NRDC, EarthJustice, Sierra Club, Audubon and the Endangered Species Coalition hand-delivered more than 100,000 comments from Americans around the country opposing Bush’s changes to endangered species protections today.

The Bush administration has been extremely effective at shutting down public input, including of course on endangered species issues. Americans who oppose Bush’s proposed endangered species regulations are not allowed to email or fax in comments.

So, a number of conservation organizations collected the comments by email–clearly the most convenient way for most of us to respond. It was heartening to read people’s concern for wildlife with comments coming in from around the country. Yes, we did get plenty from places like Berkeley and Seattle. But, we also received comments from Kimberly, ID, Mobile, AL, Toledo, OH, Tallahassee, FL, Charleston, WV, Manchaca, TX, Old Monroe, MO and Topeka, KS. 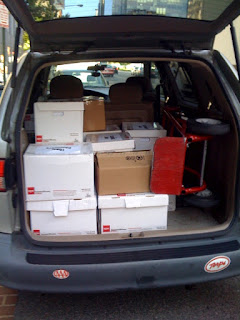 Clearly, people in every state want to see our wildlife and our wild lands protected.

To be sure that each and every one of these comments would be counted, we decided to personally deliver them. We headed out to Ballston, Virgina this morning with half of us (and a bit more than half of the comments) in my parents trusty mini-van.

After the initial shock wore off, the US FWS representative took all of comments up to their offices and assured us that they would be reading them all.

Afterwards, we couldn’t help but wonder whether the Bush administration or perhaps the next administration will change the way that comments can be submitted. We certainly hope that email submissions will be reinstated.

The comment period is still open (until October 14th) and citizens can submit them directly through this difficult-to-find link.