Last night the Endangered Species Coalition co-hosted a screening of A Snowmobile for George at the Center for American Progress.

The film is a story of how the Bush administration’s weakening of environmental protections has directly and seriously impacted tribes-people, fishermen, ranchers and fireman. The first-hand messengers are pretty powerful. And the consequences that they face are pretty severe. 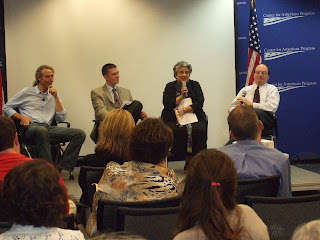 The movie was followed up with a panel, including Todd Darling, the filmmaker, Reece Rushing from the Center for American Progress and Francesca Grifo from the Union of Concerned Scientists’ Scientific Integrity Program. Todd gave us insights into what prompted him to make the movie. Reece told us of the litany of regulations that the Bush administration is weakening as they head out the door. Thankfully, Francesca had some good news for us about solutions, making science the basis for decision-making and protecting those in the government who speak out when they see foul play.

It was a great evening, and if you’d like to see the film for yourself, check out the A Snowmobile for George website for a list of upcoming showings. If you don’t have one in your area, but know of a theater that might love to run it, get in touch with Todd!