We’ve been examining the President’s Report on Climate Change in recent posts and looking at the ways that climate change is adversely effecting wildlife. We’ve previously discussed the plight of the polar bear and the pika. Today we’ll look at migratory birds.

Migratory birds are particularly likely to continue to be affected by climate change as they depend on multiple and sometimes diverse habitats for survival. Already, some species are suffering as a result of climate related shifts.

The Audubon Society recently published a study showing that North American migratory birds were incerasingly moving northward and inland in an attempt to find suitable habitat. The study of more than 300 bird species showed an average winter shift of 35 miles, while some birds, such as the purple finch, have moved hundreds of miles North. The northward shift is also occuring in Europe. A report recently published by Reuters showed that birds were moving their breeding grounds as far as 250 miles northward.

Still other birds are mistiming or mislocating their migrations. Some European cranes have stopped migrating at all, spending their winters in Germany instead of flying South. These alterations in timing are then causing the birds’ relationships with plant and prey species to go out of sync. The pied flycatcher has suffered losses up to 90 percent in some areas, a loss strongly linked to climate change induced mismatch. 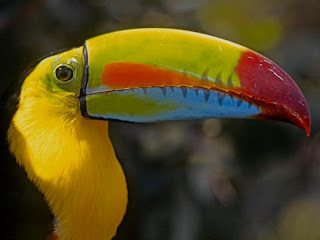 Some lowland birds are moving further upslope in an attempt to remain in their required microclimates. Toucans in Costa Rica are populating mountain forests, where they’d previously been confined to lower elevations. This shift is leading to conflicts with native species with whom they compete for nesting space and food.

A Stanford University study showed that 30% of land bird species were likely to become extinct if temperatures rise by 6.4 Degrees Celsius by 2100 as predicted by the IPCC (International Panel on Climate Change). The research showed that as temperatures climb, birds were moving higher in search of food and habitat but eventually exhausteed the supply of both and perished. 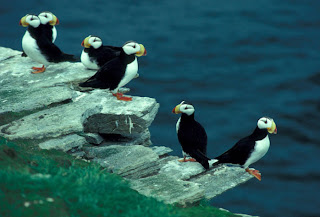 The changes in ocean current wrought by global warming appear to be causing higher mortality among seabirds too. Scientists in California have recovered unusually large numbers of starving or deceased birds washed ashore, due to a lack of food sources. As the ocean warms, upwelling is happening later or not at all. This leads to less plankton and fish. This in turn means less food for the puffins and auklets and their young.

It’s not too late to help birds cope with climate change, according to the United Nations CMS. We can protect and restore stopover and nesting habitat critical to their survival. As importantly, we can enact strong climate change legislation with wildlife allocation funding intact. As it’s currently written, the American Clean Energy and Security act would direct 1 to 4 percent of carbon allowance revenue to the protection of wildlife. Help ensure that funding stays intact and that species are protected by contacting your Senator today and asking them to pass a strong climate bill.

2 comments on “Flying Too High: Migratory Birds and Climate Change”