In the first part of our series on the President’s Report on Climate Change, we discussed the potential negative effects of temperature change on the polar bear. Another species at great risk due to climate change is the North American Pika. 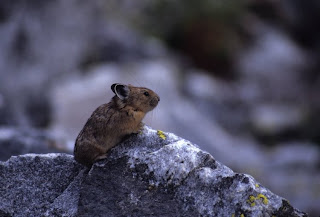 The North American Pika is a hamster-like relative of rabbits and hares, ranges from 3-5 inches in length and has a densely furred coat that it does not shed and, as such, it can not dissipate heat easily. Its range includes the mountains and foothills of the Western United States and Canada. They’re primarily solitary creatures, but they’ll often live near each other in talus fields. Hikers may recognize the pika from the shrill whistle it sounds as a warning when potential predators approach. It’s an herbivore that eats grasses and other types of vegetation. It does not hibernate, surviving winter by eating vegetation that it has sun dried and stored for later use.

The pika is thought to be the “canary in the coal mine” for global climate change related impacts because they are especially heat sensitive and susceptible to even minor changes in temperature. The pika’s normal body temperature is roughly 104 degrees Fahrenheit and even a short exposure of less than an hour to temperatures above 75 degrees Fahrenheit can be fatal. Because of this, pikas seek higher ground as the temperature rises, leaving some previously populated areas locally extinct.

The Journal of Mammology recently published a study showing that pika have disappeared from 9 of the 25 colonies it observed. Further, biologists have observed that of the remaining pika colonies in the Western U.S., they are on average 900 feet further upslope. Because of this and efforts by conservation groups, the USFWS is conducting a status review to determine whether to add the pika to the Endangered Species List. The decision came as a result of a lawsuit filed by the Center for Biological Diversity and Earthjustice seeking protection for the species. The USFWS will announce its decision regarding species protection by February 1, 2010.

To find out more about climate change and it’s effect of species as well as what you can do to help, please visit the ESC website at www.stopextinction.org.