This post is a guest post submitted by John Young, former and first bull trout coordinator, USFWS and prior to USFWS an employee of NOAA Fisheries.
The U.S. Fish and Wildlife Service (FWS) has again proposed a designation of critical habitat for bull trout in the contiguous United States. The proposal has been thoughtfully prepared, is currently being peer reviewed, and is appropriate relative to the requirements of the Endangered Species Act (ESA), except that it is about eleven years late relative to the statutory requirement. 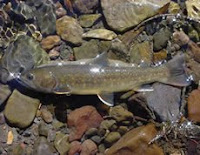 Much of the delay can be attributed to the obfuscating tactics of the Bush administration aimed at blocking implementation of the ESA. Ridiculous and illegal policy overlays that gutted the science-based products of the FWS and NOAA Fisheries, the Federal agencies tasked with implementation of the ESA, were routine during the eight-year tenure of Bush-appointed Secretaries of Interior. Unqualified but forceful political appointees ruled over the FWS and NOAA Fisheries with an iron hand, defying logic and consistently usurping the scientific foundation of ESA implementation produced by the agencies’ biological staffs. However, not only Republicans are to blame. The previous Democratic administration of Clinton was also guilty of similar delay tactics in implementation of the ESA, if not of the outright undermining of scientific integrity.
During both administrations, the unwritten policy of both the FWS and NOAA Fisheries was to ignore the legal requirements of the ESA relative to designation of critical habitat for listed species until forced to do otherwise under threat of lawsuit. The dubious, short-sighted rationale was that critical habitat provides little tangible conservation benefit and tight budget dollars were better spent elsewhere. The fact that designation of critical habitat for listed species is required by Federal law within one year of listing, as Department of Interior solicitors have continually advised, was viewed as an irritation by agency managers, not a responsibility.

What happens when bureaucrats make the colossally egotistical decision to implement laws passed by Congress, at least theoretically representing the will of the people, selectively? In the case of critical habitat the result is almost always a costly exercise of “delay and pass the buck” that is the poster child of bad government.
The ESA is quite clear relative to the identification of critical habitat in a timely manner and, therefore, plaintiffs seeking proper implementation of the law almost always prevail. When they do, a cascading effect rolls through the FWS or NOAA Fisheries, through the parent agencies of Interior and Commerce, and even affecting budgeting and staffing at the Department of Justice. At the agency level, biologists are hastily assembled to meet court imposed deadlines in an atmosphere of near-crisis. Further up the line, Department of Interior solicitors are engaged and Department of Justice attorneys are assigned. When plaintiffs prevail their legal costs and even travel expenses are paid by the government. The routine, recurring negative publicity that the agencies receive for ignoring their legal mandates is reflected in lowered staff morale, and certainly influences the willingness of peer reviewers from outside the agency to participate in what is often viewed not as a scientific endeavor, but a cynical political exercise. And at the end, the requirements of the law are finally fulfilled, but at greater expense to the individual government agencies and Departments, tremendously greater cumulative expense to taxpayers, and to the detriment of public confidence in government.
For bull trout critical habitat, it is eleven years and still counting. For taxpayers, it is a continuing travesty of government waste and abuse of power. And in the meanwhile, habitat essential to the recovery of this iconic native fish has been left unprotected.
For information on how you can attend a public informational meeting or submit written comments on the proposed critical habitat revision, see this FWS page.