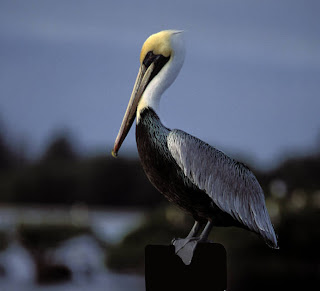 As part of our efforts to continue awareness of the impacts of the BP Oil spill on Gulf wildlife, we’re profiling impacted Gulf species. Familiar to most anyone following the coverage of the crisis is Louisiana’s state bird, the brown pelican.

The big billed bird can grow to have a wingspan of up to 8 feet and weigh in at 8 to 12 pounds. It’s a large bird but the smallest of the 8 species of pelicans. It’s also unique in that it dives into the water from up to 30 feet above to capture it’s prey. After it snatches its lunch and a bill-ful of water along with it, it tips its bill downward to drain the water before swallowing the fish.

This method of diving is naturally a liability in oil covered waters. When the brown pelican dives into the sea while foraging, its feathers can become saturated with oil threatening it’s ability to insulate. The pelican’s feathers serve as a wetsuit maintaining it’s internal body temperature. When exposed to oil, open holes develop in that vital barrier that the feathers produce. With the barrier compromised, water can seep in against the birds’ skin and heat loss can occur. Since birds have normal body temperatures between 103° F (39.4°C) and 106°F (41.1°C), such heat loss in the water can be fatal.

The spill came at an especially inopportune time for the brown pelican as it had only recently recovered sufficiently to have been removed from the endangered species list. Like the bald eagle, it was nearly driven to extinction by the presence of the chemical DDT in the tissue of fish on which they feed. DDT was banned in 1972, leading the way to the pelican’s now somewhat threatened recovery. 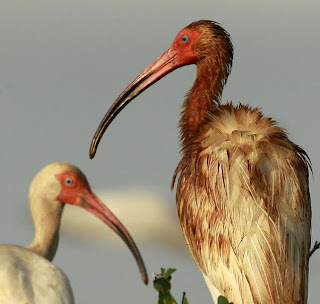 Nearly six thousand birds have been collected dead in the spill zone to date and the brown pelican has become the public face of that disastrous toll. Yet, that number may be a fraction of total number of birds killed or oiled. Inexplicably, no birds have been collected oiled or dead offshore and experienced wildlife rescue organizations such as Save Our Seabirds (saveourseabirds.com) and International Bird Rescue Research Center (ibrrc.org) have been completely shut out of rescue efforts by BP and USFWS. This has potentially led to birds and other wildlife mired in oil needlessly going without rescue and prevented an accurate count of impacted species. The latter is important not just to get an idea of the scope of the disaster but because BP’s total liability will be determined in part through the counting of protected species killed as a result of their actions.

To find out more about the ongoing crisis in the Gulf, listen to podcast interviews with experts working in the region and take action on behalf of oiled wildlife, please visit our site oilspillwildlife.org.