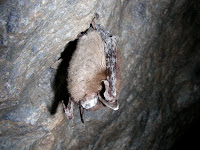 Four years after the first bats were found dead as a result of a mysterious disease known only as white-nose syndrome (WNS), the epidemic has spread from upstate New York across the Mississippi River. Over one million bats have been killed by the disease, despite cave closures and other efforts to stop it’s spread.
WNS is a disease that strikes hibernating bats in cave ecosystems. It’s so named because of the white growth that appears on afflicted bats’ noses, though the fungus has also been found on bats’ ears, tails, belly and wings. Bats affected by WNS
often exhibit signs of starvation, leading scientists to conclude that the disease may be causing bats to wake up more often during winter, depleting their stored energy reserves.
In addition to being an iconic symbol of Halloween and an often maligned and misunderstood creature, bats serve a critical role in our ecosystem. Supreme predators of flying insects, they’re able to consume over one thousand mosquitoes in a single hour. In their absence, farmers would be forced to use increased pesticides and insect-borne illnesses would rise. Bats also serve as pollinators and seed dispersers in some environments.
WNS is a threat to at least 9 species of bats, 2 of which are already endangered. The Indiana and gray bats could face catastrophic loss and potential extinction if the disease’s spread isn’t stopped.
A 2008 study identified the fungus responsible for the disease as Geomyces destructans, but prevention solutions have proven evasive. No definitive cure has been found and despite efforts to halt the westward encroachment of the disease, it continues to spread.
We’ve partnered with our member group Bat Conservation International to implore the Administration to fund research while there’s still time to prevent the threat of extinctions.
You can take action to help save bats today by sending President Obama a letter asking him to fund WNS research.