At the Endangered Species Coalition, we know art is a powerful medium for change. We host an annual Saving Endangered Species Youth Art Contest, and each year we get tons of amazing submissions from young people, grades K – 12, from across the country. In 2020, we had nearly 1,400 contest entrants, reflecting young people’s commitment to using artwork to express their support for endangered species conservation. 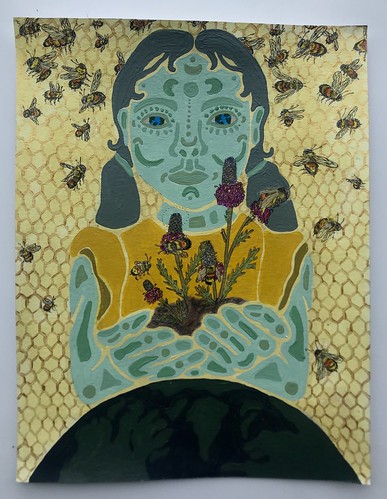 Our 2020 grand-prize winner, Isis Stevens, is a 14-year-old artist from Denver, CO, and a stunning example of art in action. Recently, Endangered Species Coalition organizers across the country held virtual in-district meetings. Each April, Congressional members leave our Nation’s Capitol and head home to their districts in their states. This is a great time to visit with our elected officials, educate them on endangered species issues, and ask them to support laws to protect them and their habitats.

These meetings are so important – especially now. COVID-19 is keeping so many of us away from our families, our work, and our friends. This is a scary and unpredictable time. But now is not the time to sit back, even though many of us are stuck at home. And we need our elected officials to champion innovative solutions for the communities and habitats that need it most.

So last week, at our in-district meetings with some of Colorado’s members of Congress, I was lucky enough to be accompanied by Isis. As a future voter, she used her voice to advocate for wildlife –  bravely and passionately. I’d be lying if I said I didn’t tear up while she was speaking with a staff member from Congresswoman DeGette’s office – because I did.

Our virtual in-district meetings were so powerful. To give you a sense, we want to share Isis’s statement that she gave during our meetings. She describes her winning art piece and gives our Congressional leaders some words of warning, plus a message of hope (if action is taken).

I created this piece to bring light to the endangerment of Rusty Patched Bumble Bees, their importance in our ecosystems, as well as hope for a brighter future. The base of the painting depicts the earth, oceans black with pollution and land dark without forests, plants, habitats, animals, and pollinators, such as the Rusty Patched Bumble Bee.

From some of the earth’s largest beings, to the tiniest ones that hold our ecosystems together, currently almost 200,000 of our earth’s species are endangered, while many more are threatened, a large portion of which are insects. Ever since I was little, I have absolutely loved insects, specifically butterflies and bees. Both happen to be the earth’s two main pollinators that are both currently endangered or threatened. They are in this state due to impact from our most careless and destructive everyday actions, such as habitat destruction and land loss due to agriculture, factory farming and urban developments, as well as harsh pesticide use, bacterial infections, and the rapidly growing effects of climate change.

In addition to acknowledging the role insects and pollinators play in supporting our earth’s ecosystems, it is also important to see the role they play in many people’s cultures and art, such as mine. Since the beginning of time, people have been using these tiny creatures to symbolize beauty, change, happiness, death, rebirth, and are seen by many as precious beings that carry the souls of past ancestors and loved ones. Everywhere you turn, people are using butterflies and bees as symbolism and to bring beauty and nature to art, literature, and music of all kinds. So if pollinators seemed to hold such a beautiful source of symbolism in our lives, why aren’t we frantically working to protect these precious creatures?

Above the dark earth stands a figure of a little girl, surrounded by honeycomb. Inside of her eyes shines a brighter, healthier earth. She is holding out her hands full of soil, in both desperation and hope by providing the bees with a healthy and safe home. She is not only a representation of our youth but also a form of mother nature, looking down on the destruction we have caused. Around her flies a swarm of Rusty Patched Bumble Bees, attracted by the flowers that are growing from the soil in her hands. The flowers she holds are Purple Prairie Clovers, one of many plant species dependent on pollination by the Rusty Patched Bumble Bee. Alongside bees, butterflies are one of the world’s most important pollinators, with over 75% of living plants dependent on them.

This piece is meant to spark recognition of the fragile state of one endangered species that plays a crucial role in the survival of our ecosystems, as well as to depict a way in which we can help to bring hope through the eyes of youth.

The earth and these species were here long before we were and will hopefully be here long after we pass. Unfortunately, by the time I am your age, our earth’s pollinators could become completely extinct. This idea is absolutely terrifying. The thought of having to live in a world where the majority of our vegetation has lost life from their pollinators, as well as to think that these beautiful creatures will never be seen by my children, is devastating. So I am here now, asking you through my art and my voice to acknowledge their importance in everything from our smallest plants and insects, to our food industry and everyday lives. I am asking you to take advantage of your privilege in having a position of power, to do what many cannot, and take a stand to help save our earth’s endangered species.

After hearing Isis’s story, Kaila Hood, Constituent Services Representative at Congresswoman Diana DeGette’s office, said, “We at the Congresswoman’s office are always happy to meet with our constituents to discuss issues impacting our community. It is powerful to hear constituent stories, but it was especially moving to see Isis’s artwork during our meeting last week. Her artwork really brought home how critical it is to protect our pollinators. We can’t wait until Isis is in high school and can participate in our Congressional Art Competition! She is a gifted artist and storyteller.”

As the winner of our 2020 Saving Endangered Species Youth Art Contest, Isis is using her voice and her art to protect wildlife and endangered species. We can all follow her example by asking Congress to pass legislation to restore the Endangered Species Act.

Thank you for your commitment to wildlife and wild places!