The United States certainly deserves praise for introducing international proposals that would have provided protections not only for charismatic species like the Polar bear, but also for species such as Bluefin tuna, corals and sharks.

The United States’ proposal would have banned the international commercial trade in polar bear parts and products. In 2008, the U.S. Fish and Wildlife Service listed polar bears as threatened under the Endangered Species Act. According to the White House report Global Climate Change Impacts in the United States, ” about two-thirds of the world’s polar bears are projected to be gone by the middle of this century. It is projected that there will be no wild polar bears left in Alaska in 75 years.” The polar bear is in critical need of national and international safeguards. 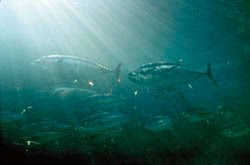 The United States also supported protections for a number of sharks – the Oceanic whitetip, Dusky, Sandbar, Spurdog, Porbeagle and Scalloped, Smooth and Great hammerheads. Unfortunately, of these, only the Porbeagle shark proposal made it through the 15th Conference of the Parties of CITES.

These results are highly disappointing. And, if anything, they highlight the need for the United States to continue to be a strong advocate and protector of endangered species.

Historically, America has been a leader in endangered species protections. Our nation has one of the strongest laws in the world to protect endangered species and their habitat. Because of the Endangered Species Act, America is still blessed with bald eagles and peregrine falcons flying in our skies, gray wolves and grizzly bears in the wilderness, and whales and dolphins off our coast.

As a nation, we have made a sacred commitment that no species that shares our land will slip into extinction. And we have an incredible record as a nation of endangered species protection. According to the National Research Council, the Endangered Species Act has saved hundreds of species from extinction.

And while our record is comparatively strong, there is certainly more that we could be doing within our own borders. In particular, we have in recent years fallen short of our responsibilities to list and protect species under the Endangered Species Act. And, the Obama administration has yet to announce how it will address the growing backlog of hundreds of “candidate” species–identified as needing protections, but which haven’t yet made it on to “the list.” For more information, check out the Endangered Species Coalition’s report Without a Net- Top Ten Wildlife, Fish and Plants in Need of Endangered Species Act Protection.

Listing is key, because the Act has saved more than 99% of listed species from extinction. (One scientific analysis showed that between 1973 and 2004, a total of 227 species would have likely gone extinct had they not been on the list.)

Although some nations opposed restricting trade in endangered species due to economic arguments, the protection of plants, wildlife and fish is a boon to economies across the globe, providing us with priceless benefits from supplying lifesaving drugs and clean drinking water to recreation and tourism. Hunting, fishing and wildlife watching create $108 billion in annual revenues, which would rank as the 7th largest corporation in America. These activities employ nearly as many people–2.6 million–as in the computer industry in the United States. And extinction of any endangered species is something the world just cannot afford.

56% of the top 150 most popular prescribed drugs are linked to discoveries of natural compounds in the wild, with an annual economic value of $80 billion. This could be the tip of the iceberg–less than one percent of all tropical plant species have been screened for potential pharmaceutical applications. At the current extinction rate, experts estimate that the Earth is losing one major drug every two years. A cure for cancer or AIDS may lie in a plant or animal waiting to be discovered.

While the United States suffered setbacks at CITES these past two weeks for polar bears, tuna, sharks, coral and many other species, it doesn’t prevent us from being able to continue to take significant steps to protect wildlife, plants, birds, and fish. Endangered species protection has certainly been a place of high ground for the United States. Let’s not cede that. We urge the parties at CITES to continue to pursue efforts to protect wildlife, birds, fish and plants on the brink of extinction. And we must continue strong protections for endangered species at home.

We owe it to our children and grandchildren to be good stewards of our shared planet and leave behind a legacy of protecting endangered species and the special places they call home.