America’s Everglades is in Hot Water

Share on facebook
Share on pinterest
Share on twitter
By Caitlin Leutwiler
Communications Associate
Defenders of Wildlife
America’s Everglades boasts an impressive resume, from its rich mosaic of habitats – including sawgrass prairies, freshwater marshes and cypress forests – to its diverse range of native species – among them five kinds of sea turtles, the red cockaded woodpecker and the critically endangered Florida panther. A peninsula surrounded by three seas, it is the only place in the world where both alligators and crocodiles reside. It’s easy to see why the region has been designated an International Biosphere Reserve and a World Heritage Site in Danger. 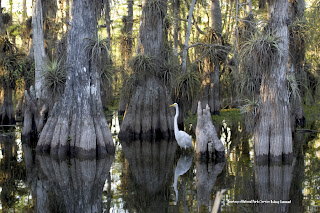 But for the Greater Everglades, climate change could not be more immediate, or frightening. A low-lying region, the Everglades is considered one of the most vulnerable parts of the world to sea level rise. And with projected rises of three feet or more over the next century, the risk that the ecosystem will be submerged under water is very real. The outlook gets worse – climate change will very likely bring stronger storms, higher water temperatures, salt-water intrusion, beach erosion, changing species ranges and new invasive species. It’s a threatening vision of the future, and for the 67 federally listed threatened and endangered species and more than 600 rare or imperiled Florida species, these disruptions could be devastating.

One of the Sunshine state’s most iconic creatures – the Florida panther – also happens to be one of its most imperiled. With little more than 100 individuals in the wild, panther populations still hang in the balance. Increased development and habitat loss are already major threats to these wide-ranging cats – a single panther can roam as far as 200 miles. Losing the Everglades, home to the only breeding population of Florida panthers, could make it impossible for the species to ever recover.
So what can we do to protect this sinking hotspot of biodiversity? Interior Secretary Ken Salazar recently announced the proposal to create a new national wildlife refuge and conservation area that would help conserve the headwaters and fish and wildlife of the Everglades. In addition to improving water quality, these 150,000 acres would protect important habitat for 88 federal and state listed species, including the Florida panther. The proposal holds much promise – but it won’t be enough. We must take advantage of existing measures to restore and conserve the Greater Everglades ecosystem as well as coming up with new strategies to buffer the unique region from the oncoming storm. By taking action now, we just might be able to keep this American treasure and the diversity it holds from being swallowed by the sea.
***
This post is a guest post by Defenders of Wildlife as part of our occasional series from Endangered Species Coalition member organizations.

0 comments on “America’s Everglades is in Hot Water”