What Happens to the Pack When a Wolf Dies

When People Kill Wolves, Packs Become Less Stable and Can Cease to Exist. 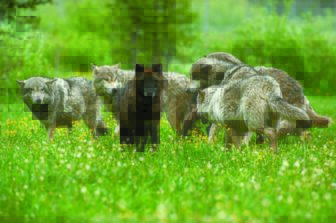 Ketchum, ID – Groundbreaking research by Kira Cassidy et al., to be published in the February issue of Frontiers in Ecology and the Environment, establishes for the first time the impact of human-caused mortality on gray wolf packs (Canis lupus) that live primarily within U.S. national parks. (“Human-caused Mortality Triggers Pack Instability in Gray Wolves”) This study examined over 118 years of cumulative data from five national parks: Yellowstone, Grand Teton, and Voyageurs National Parks, Denali National Park and Preserve, and Yukon-Charley Rivers National Preserve. While inside the parks, these highly social carnivores are protected from most types of human-caused mortality like state-run hunting and trapping seasons. However, when wolves wander outside the boundaries of the five national parks in this study, people frequently kill them.

Much previous research has examined the impact of human killing of wolves at the population level, whereas this research provides insight on the effects at the level of the pack. In its findings, this study reveals that these losses are often highly disruptive and can cause pack instability, leading to several possible outcomes including the collapse of entire packs.

Like other highly social animals, including gorillas, elephants and dolphins, wolves live in family units where they interact and communicate extensively and cooperate in everything from play to survival. Wolf packs consist of the pack leaders, which are typically the breeding male and female, sometimes their siblings, and often multiple years of their offspring: a wolf family. As with social animals around the planet, the researchers in this study found that the loss of a leader (a parent) is especially devastating to the family.

By recognizing the importance of the family unit to a pack’s survival, this publication represents a notable shift in discussion. Where management decisions have historically been driven by population dynamics, this science demonstrates the need to consider pack-level dynamics and gray wolf biological processes when determining best management practices for wolves. This science is especially important in the context of transboundary decisions that affect animals that live primarily within a protected national park.

Transboundary issues are significant because current state policies impede the National Park Service from achieving its mandate that says in part that the Service will “…provide for the enjoyment of…wild life in such manner and by such means as will leave them unimpaired for the enjoyment of future generations.” The sanctioned killing of wolves along the boundaries of national parks interferes with this mandate.

“This seminal study confirms what we have been observing in Yellowstone – when pack leaders are killed, the pack disbands. It’s a disruptive dynamic to ecotourism, which relies on pack stability and consistency. More importantly, it devalues what Americans love about their national parks – places where wildlife can exist largely unfettered by human exploitation,” said Dr. Nathan Varley, wildlife biologist and owner of Yellowstone Wolf Tracker.

The size of packs in this study ranged from a pair of wolves to a 37-member pack. All pack members take part in raising the pups of the breeding pair each year. Young pups learn to hunt natural prey from the older members of the pack. This research discusses how wolf pack size is “critical to hunting prey, to raising pups and to recovering from disease.” Therefore, pack life is an appropriate criterion “for measuring gray wolf biological processes and determining impacts from humans.”

The researchers used aerial and ground tracking of radio-collared wolves and their packs, whose home territory was primarily inside the parks. Data from 193 packs between 1986 and 2021 are included in this study of human-caused mortality on pack persistence and reproduction rates. The effects on the pack after the death of a leader versus any other pack member was evaluated. The data indicate that the loss of even one wolf, especially a leader, can have a detrimental effect on the stability of a pack. Loss of multiple members of a pack can prove to be devasting and can lead to dissolution of the entire pack.

The National Park Service has a preservation mission to provide wildlife the highest level of protection from human impacts. This research reveals the dramatic negative effect on wolf packs from human-caused mortality, such as from hunting and trapping. Specifically, previous population level studies have missed the adverse impact human-caused mortality has on wolves’ social structure. This important new research should provide wildlife managers and policymakers with the best available science to make decisions that minimize the destabilizing effects of arbitrarily killing individual wolves.

According to Dr. Paul Paquet, Senior Scientist, at Raincoast Conservation Foundation in Canada, “The foundation of good conservation and management of wildlife is science buttressed by persuasive moral arguments and ethics. Accordingly, this seminal study has important implications regarding the conservation of gray wolves and the contentious public debate surrounding their future.”

Living with Wolves is a non-profit organization dedicated to engaging the public worldwide in education, outreach and research to promote truth and understanding about wolves, while encouraging coexistence and inspiring people to take action to protect them.

PrevPreviousLitigation to Protect the Vaquita in Mexico
NextYou are invited to Collaborate for Wildlife and Plants!Next