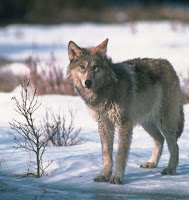 The U.S. Fish & Wildlife Service (FWS) announced today that they are walking away from wolf recovery in the United States.

That, of course, is not how they framed it, but with much of the nation’s wolves still yet to be recovered, it’s difficult to conclude otherwise. The FWS spared Mexican gray wolves in the Southwest, but have stripped Endangered Species Act protections from wolves in the rest of the country.

The following is a statement from ESC Executive Director Leda Huta:

With so much work left to be done, and wolf populations around the country still recovering, the conservation community is very disheartened to see that the FWS has given up on wolves.

As a community, we don’t expect to see wolves everywhere they once roamed. However, if protected, we know that wolves have the potential to return to key states like California, Colorado, Utah, Maine, and New York–all of which have suitable wolf habitat.

This is a disappointing beginning to Secretary Jewell’s term at the Department of Interior.

Update: The public comment period for this proposal is now open. You can submit a comment here.