The nets used by the shrimper that caught the shrimp in your bisque are having an enormous impact on the survival of threatened and endangered sea turtles. 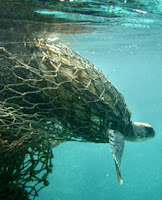 In the 1980’s, it became apparent that modern shrimp fishing and sea turtle populations were increasingly unable to coexist. The United Nations then estimated that the U.S. shrimp fleet was catching over 47,000 turtles yearly. This led the United States to enact legislation requiring shrimpers to use Turtle Excluder Devices (TED) on their trawlers.
A TED is a metal grid of bars similar in appearance to a grill that attaches to a shrimp trawling net.  It has an opening that allows large animals and objects to escape as the net is dragged by the trawler. This not only benefits turtles, sharks, and other large fish that aren’t targeted by shrimpers, but protects their nets from being damaged by marine debris.
Properly used, TEDs reduce bycatch by up to 60% and are 97% effective at releaseing sea turtles unharmed. Obviously, they only work if they’re used and while federal law mandates their use on most shrimp trawlers, the use of TEDs is not universal. A loophole in the law exempts trawlers using skimmer and try nets from the requirement. It was thought that shrimpers using these kinds of nets would bring their trawls up frequently enough to prevent ensnared turtles from drowning but such is not the case.
According to the National Marine Fisheries Service (NMFS) the roughly 2,500 skimmer trawls in operation capture as many as 28,000 sea turtles every year. In 2011 alone, 3,585 sea turtles washed up dead on the Gulf and Atlantic coasts during the shrimp season due to drowning.  Skimmer nets are so hazardous to marine life that they’re banned in Texas and the Florida has mandated the use of TEDs.  Thousands of shrimpers in Louisiana, Mississippi and Alabama continue to use skimmers without TEDs and thousands of turtles are ensnared and drown as a result.
NMFS is considering a policy that would close this loophole and save thousands of sea turtles annually. We have until July 9th to weigh in. You can take action by sending a message from our action page or share your own words by going to the regulations.gov comment page.