Saving the Sonoran Pronghorn Will Help Save Us

This is a guest post from Tierra R. Curry, M.S. Conservation Biologist  Center for Biological Diversity. It’s part of a series around the release of the report Water Woes: How dams, diversions, dirty water and droughts put America’s wildlife at risk.

In the Sonoran Desert of Arizona, one of the most magnificent animals in the world is teetering on the very brink of extinction. The Sonoran pronghorn has survived in the desert for tens of thousands of years, but increasing drought and climate change coupled with habitat loss have nearly decimated its population. Today only about 100 Sonoran pronghorn survive in the United States, making it one of our country’s most endangered mammals.
The Sonoran pronghorn is the fastest land animal in North America, having evolved its rapid speed to outrun prehistoric big cats and wolves. Pronghorn can run at speeds of 60 mph, but they can’t outrun climate change without our help. The Sonoran pronghorn was recently named one of the top 10 species in the country most threatened by water shortage or pollution. The pronghorn was protected under the Endangered Species Act in 1967, but to ensure its recovery, actions must be taken to address global climate change. 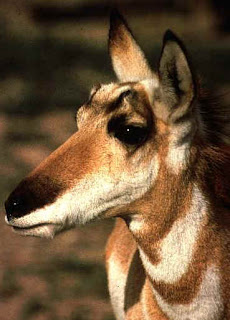 Though its common name is “pronghorn antelope,” pronghorn are not actually antelopes – their closest living relatives are giraffes. Pronghorn are different from all other hoofed animals because their branched, hollow horns are made from hair, like the permanent horns of goats, but are shed each year like the solid horns of deer. At 3 feet tall and 100 pounds, they are the size of goats. Pronghorn have excellent vision and eyes nearly as large as those of an elephant, which allow them to easily detect predators.
The strikingly patterned pronghorn is a beautiful animal. Pronghorn have long been depicted in petroglyphs. They symbolize the essence of prehistoric wilderness when vast herds roamed across an untamed North American continent. Pronghorn have been culturally significant for tens of thousands of years. Taking action to save them will ultimately help save us.
Drought is a major factor affecting the survival of Sonoran pronghorn adults and fawns, and the increasingly severe and frequent droughts in the Southwest have become a significant threat. During a major drought in 2002, more than 80 percent of the U.S. pronghorn population died. Drought is also inhibiting the herd’s population growth, as fawn survival is highly dependent on the timing, duration and distribution of rainfall. Without rain, there isn’t enough forage for the newly-weaned fawns or adult pronghorn to survive. Federal and state managers currently have to supply water during the driest months to keep the U.S. herd from perishing.
Pronghorn face many threats in addition to water shortage, including Border Patrol activities, off-road driving and development. Roads and other developments fragment the pronghorn’s foraging grounds and block access to food sources, keeping the pronghorn from being able to disperse to greener areas during drought.
Individuals can help save the Sonoran pronghorn by working to reduce their individual greenhouse gas footprint and by becoming politically active in the campaign to protect the sensitive habitat of the pronghorn from off-road vehicle use and other harmful border patrol activities.

Learn more about water-related threats facing Sonoran pronghorn and other species at www.waterwoes.org.

1 comment on “Saving the Sonoran Pronghorn Will Help Save Us”