Recently we’ve been discussing the effects of climate change on various species such as pikas, polar bears and birds. Today we’ll turn our attention to reptiles.

Like pikas, reptiles are moving upslope according to research conducted by the American Museum of Natural History. As they move upslope in response to warming caused habitat loss, they will eventually run out of habitat and gradually go extinct. The Museum’s research showed an average shift upslope of 62 to 167 feet, a substantial movement for a species with limited range. As temperatures rise, with a worst case scenario calling for a 6 degree Celcius rise by 2100, species going upslope will soon run out of viable options. 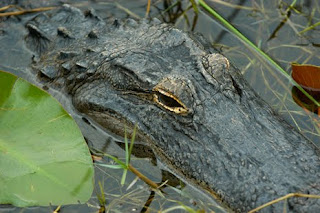 Rising water levels are pushing some aquatic reptiles northward as well as inland. According to the Environmental Protection Agency, this phenomenon will bring American Alligators in closer proximity to humans. The increasing number of conflicts will be dangerous not only to people and domestic animals but to the alligators, pythons, and other reptiles that are crowded out of their present swamp and mangrove habitat into backyards and roadways. In addition to being hit by cars, many of these animals will be killed out of fear or retaliation when they come in contact with humans. 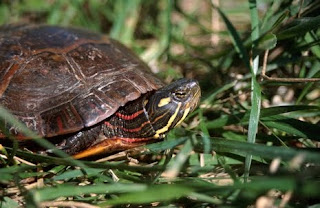 In addition to changing the locality of reptile habitat, rising temperatures are impacting the biological processes of species whose sex determination is thermally dependent. According to research published in The Proceedings of the National Academy of Sciences, the sex ratio of some populations of painted turtles (Chrysemys picta) are becoming skewed to an extent that could bring about their extinction if temperatures continue to rise. Statistical evaluations indicate that an increase in mean temperature of 4 degrees Celcius would effectively eliminate production of male offspring, ending the possibility of reproduction for the painted turtle.

Lastly, reptiles are at risk of overheating. A recent study by U.S. and Australian researchers concluded that the world’s ectotherms will spend an increasing amount of time and energy trying to stay cool. With limited shade habitat, that will require the expenditure of more energy to thermoregulate, or as one researcher said, “”Effectively their rent goes up, but the time they’ve got to find an income goes down”.

It’s critical that we act to prevent the worst case scenario from occuring and pass a strong climate bill with adequate wildlife allocation funds attached. Please contact your Senator today and ask them to support strong legislation.

To learn more about species in a warming world, please visit the Endangered Species Coalition website at stopextinction.org.

1 comment on “Reptiles Slowly but Steadily Feeling the Heat”