I have seen the future – and it works!

Share on facebook
Share on pinterest
Share on twitter
By Brock Evans
President
Endangered Species Coalition
The occasion was the event billed as a Rally Against the Proposed Keystone (‘Tar Sands’) Pipeline, slated to run 1700 miles from far northern Canada to Houston Texas – its oil there to be refined, and sold abroad. 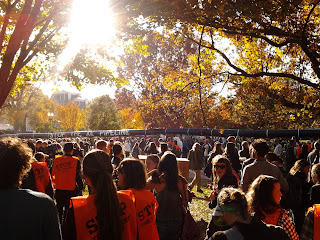 November 6 was the date of this, my Opening to the Future. The Rally was to be held at Lafayette Square, right across from the White House. Its purpose was to protest the environmental dangers of this pipeline, and the even worse earth-and-atmospheric abuses involved in its brutal extraction process, sited in the wildlife-rich Canadian Boreal Forest zone. The message was to President Obama, and it would say “Do Not allow Big Oil to build this monstrosity – and all it represents — across our own country.”
This was to be no ordinary protest, of which we see many each year here in the capital. This time we were going to encircle the White House, the whole thing, grounds and all – with a fence of human arms and hands. That’s something that hadn’t even been attempted for decades.
“Human arms and human hands… cannot be done except by many thousands,” I thought rather gloomily to myself as I journeyed downtown that bright sun-filled Sunday afternoon. “Thousands and thousands of people; no likely way!”
I did not expect much; just knew I had to be there… take a stand, bear witness against what I have always considered to be one of the greatest of all the assaults on our lovely little planet. Not the least of these was this monstrous project’s utter destruction of, and potential future damage to, endangered species. For example, the endangered whooping crane makes its summer nesting grounds in those same boreal forests and wetlands which are being so harshly logged off, ripped out, its marshes and meadows filled with toxic pollutants. The proposed pipeline — almost eerily – closely follows the crane’s migration route, as they return to Texas each year. And that’s only a part of what’s so wrong, so unacceptable about this one, I thought. 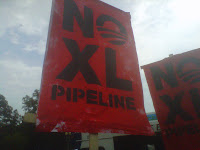 I confess I did not expect any dramatic outcome, or even a particularly major event itself, this time. I just knew I had to be there, no matter what.
I was stunned and delighted by what it actually was, even more by what it became. When I arrived the Square was already over half-filled; and the people kept coming, in their thousands – especially the younger people. My heart opened up – stirred as much by the feeling of the crowd, as by the eloquence of numerous passionate speakers, from all parts of US and Canadian society – each detailing why this was a wrong idea, a Bad Thing. 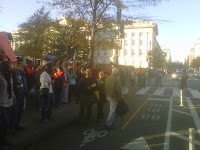 The huge crowd roared and cheered at just about every phrase, waving hundreds of mostly hand-lettered signs. As the Square continued to fill, its overflow started to file, in a solid column 10-15 deep, across Pennsylvania Avenue, around the Treasury Building, down 15th Street. Borne along by the crowd, I looked across its massed ranks and saw one of those signs – held high – an endangered species sign, about the whooping crane, and in the name of the Endangered Species Coalition! My own issue, my own people! I thought. Who can that be? Honing in on that placard as my beacon, twisting and turning, until I could get close enough – there was Mitch Merry, our young Online Organizer, and his girlfriend.

Hugs all around, and we marched happily together, down 15th street. But the crowd was so great we had to separate, looking for an open spot to link hands. Mitch had two signs, so I gladly took one.
I kept on walking, down past row upon row of linked hands, looking for an empty place. But there were none; the other half of the crowd had crossed Pennsylvania Avenue the other way – west, down 17th street and past the Old Executive Office Building, there to link up at the far southern end of the White House grounds, on the Ellipse.  And they had already arrived, at least 6-8 rows deep even at that distance from the beginning at Lafayette Square..
There was so much more, that giddy, perfect, crystal-blue, happy day. There are photographs of it, which capture its outward essence – which was the crowd itself. I only wish there had been some way to also capture its inner essence too.
This essence, and the secret of the whole thing, was in two parts. First, the sounds: the calls and response, the variety of the chants, the drummings, the happy rumblings from 10-12,000 committed people, all there for one common cause.
And second, the smiles. The smiles on everyone’s face.

For that  was the best of it and that is most of why I now feel so much faith in the Future, however scary it seems sometimes. It was the smiles, the plain unadulterated happiness out there, filling the whole air. Happiness, yes, Happiness, that at last our side was fighting back; taking on  Big Oil; pushing back publicly and hard. Happiness, that there were so many of us, and the happiness of actually seeing each other there, all together… the happiness of knowing that we who care about this  earth are nowhere near as alone as sometimes it seems portrayed in the media.

And that greatest of all happinesses, I think – the happiness of knowing that we CAN do it – we can win. (“Yes We Can”, one of the President’s campaign phrases, was one of the most commonly heard chants). 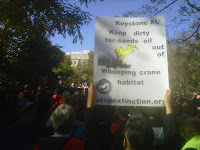 And my own personal happiness – for me, the greatest of all: the younger ones, the young people, there in their thousands and their thousands. Their energy, passion, commitment, could just be felt, everywhere, out there in the air — everywhere. And that, for me, is the happiness of knowing, now for sure, that there is hope – much hope – for the future.

I know this now, I have seen it. Because the young ones were there, and they are claiming that future. What a blessing I thought then to myself… to have lived long enough to witness, and to be a part of this moment, and at this time and in this place.

0 comments on “I have seen the future – and it works!”

PrevPreviousGoing After the One Percent
NextA Cry for the TigerNext
Menu