This post is a guest post by The Sea Turtle Restoration Project. It is a part of our occasional series by Endangered Species Coalition Member Organizations. 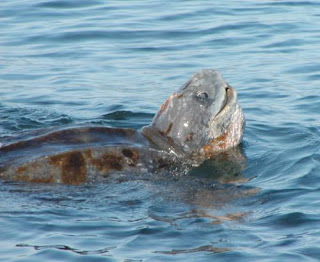 The critically endangered Western Pacific leatherback sea turtles embark on an annual migration of over 6,000 miles each year to feed on dense aggregations of their favorite food, jellyfish. The largest of all sea turtles, leatherback have experienced a catastrophic 95% decline in their Pacific nesting populations over the last several decades due to constant threats of entanglement in commercial fishing gear, poaching of turtles and turtle eggs from nesting beaches, ingestion of plastics and pollutants, and habitat loss on tropical nesting beaches.

The endangered Western Pacific leatherback sea turtles that visit California, Oregon and Washington’s coastal waters could gain long overdue habitat protections to prevent their extinction under a new government proposal. In response to years of actions by the Sea Turtle Restoration Project and its allies, the National Oceanographic Atmospheric Administration (NOAA) issued a proposed rule to designate more than 70,000 square miles of critical habitat for Pacific leatherback sea turtles in the waters off the West Coast.

While the current NOAA proposal will advance protections for leatherbacks and their critical habitat, there are some major exclusions of important protections, and comments to support strengthening the current proposal are needed.

The impacts of commercial fishery operations, specifically longline and drift gillnet fisheries, and not identified in the current proposal, and major fault that must be corrected in the final rule. These fisheries are known to encounter, entangle, and land leatherbacks sea turtles resulting in disruption of their foraging, migration, and potentially resulting in injury and death. Comments to support strengthening the current proposal with protections from commercial fisheries are needed.

The protected area proposed by NOAA stretches from Northern Washington to Southern California, but excludes a large expanse of foraging and migratory areas between the Umpqua River in Central Oregon and Point Arena in Northern California, as well as offshore areas in the U.S Exclusive Economic Zone leatherbacks must swim through to reach the proposed areas. In addition, the area proposed is much smaller than the existing Leatherback Conservation Area, which totals 200,000 square miles along the coast, an area that is closed to gillnet fishing six months of the year to protect leatherbacks. The Leatherback Conservation Area and the timed fishery closure was achieved in March 2000 as a result of a lawsuit by Turtle Island Restoration Network and allies. Comments to support expanding critical habitat area in the current proposal are needed.

Designating critical habitat for the leatherbacks will strengthen protections for all pelagic species in the coastal ecosystem along the U.S. Pacific Coast. Protection of the foraging habitats and migratory corridors are essential to the recovery of this imperiled species. Leatherbacks are the largest of marine reptiles and grow up to nine feet long and weigh up to 1,200 pounds, have survived the extinction of the dinosaurs and persisted for over 100 million years. This iconic species, the last of its kind, can only survive with continued support for their protections and continued conservation. 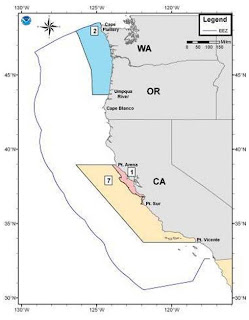 The proposed critical habitat areas are colored and labeled 1, 2, and 7 and many areas that are vital migration routes and feeding areas are excluded from the current proposal. Map NMFS Southwest Fisheries Science Center