Monarch Origami in the Southern Rockies 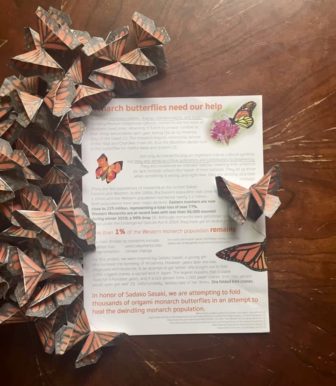 Butterflies represent rebirth, change, transformation, and hope. To many Mexican Indigenous cultures, like the Mazahua, monarchs are the souls of deceased loved ones, returning to Earth to provide comfort to their living descendants each year during Dia de los Muertos (Day of the Dead). The monarch inspires ceremonial dances of the Hopi and Cherokee tribes. And the Blackfoot people look to the butterflies for restful sleep and dreams.

To help raise awareness of the plight of monarch butterflies, the Endangered Species Coalition’s Southern Rockies Representative is leading a Monarch Origami campaign in Colorado.

This campaign was inspired by Sadako Sasaki, a young girl who survived the bombing of Hiroshima. However, years later she was diagnosed with leukemia. In an attempt to get better, she sought out to fold 1,000 origami cranes, a sacred bird in Japan. The legend explains that a crane “lives for a hundred years, and if a sick person folds 1,000 paper cranes, then that person would soon get well”. Unfortunately, Sadako died of her illness. She folded 644 cranes.

In honor of Sadako Sasaki, we worked with almost 100 Colorado volunteers to fold over three thousand origami monarch butterflies in an attempt to heal the dwindling monarch population in the West. Within each of the 3,571 origami monarchs is written the name of the person that folded it and a short explanation of why monarchs are important to them. The act of writing in the monarchs turned each one into a wish, an intention, or a prayer.

Now that we have collected all these wishes, the next stage of the project, which is currently underway, will be to display them with the help of professional artists. The monarch butterfly origami art will then be presented to our elected officials in Colorado to demonstrate a deep concern and care for our monarch population and a need to protect them under the Endangered Species Act. Stay tuned for more updates on this exciting project!

And a big THANK YOU to our volunteers, Sally, Alma, and Jodie, for these awesome photos! 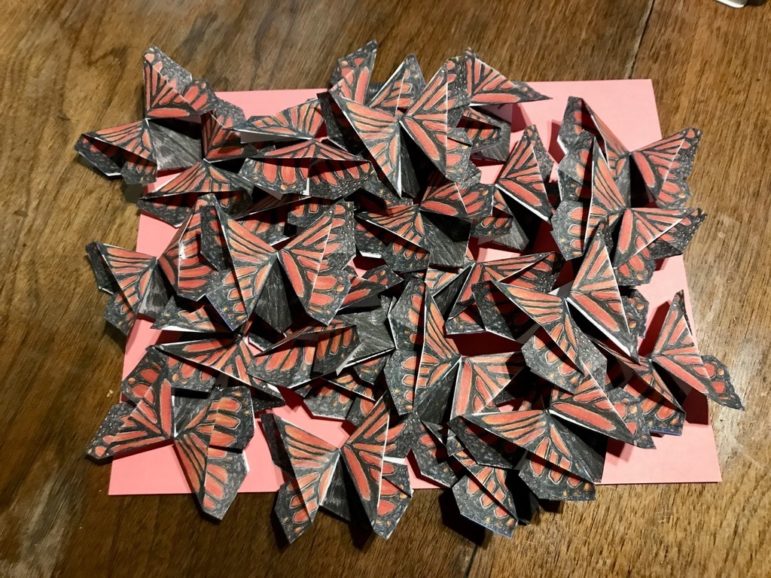