ESC & allies host Rally ‘Round the River: Rising up for Snake River salmon, orcas, and the Pacific Northwest

Rally 'Round the River

2021 offers new opportunities for so many, including the iconic Southern Resident Orcas. The population of orcas that spend the majority of their time in the Salish Sea of the Northwest were blessed with three new births since last summer, including one female that has the potential to reproduce and grow their population further. Out of the depths of a dark year, new hope may swim just off our shores.

That’s why on February 25th, six non-profit organizations banded together to host a Rally ‘Round the River: an hour long virtual event to show support for the largest river restoration in history. Removal of four dams on the lower Snake River in eastern Washington would restore the river and unlock 50% of coldwater habitat in the lower 48 states for salmon1 – which are just about the only food Southern Resident Orcas will eat. Scientists have said for years that removing these four dams, thereby restoring the lower Snake, is the single most impactful action we can take to help the endangered Southern Resident Orcas and the Chinook salmon they feed on. 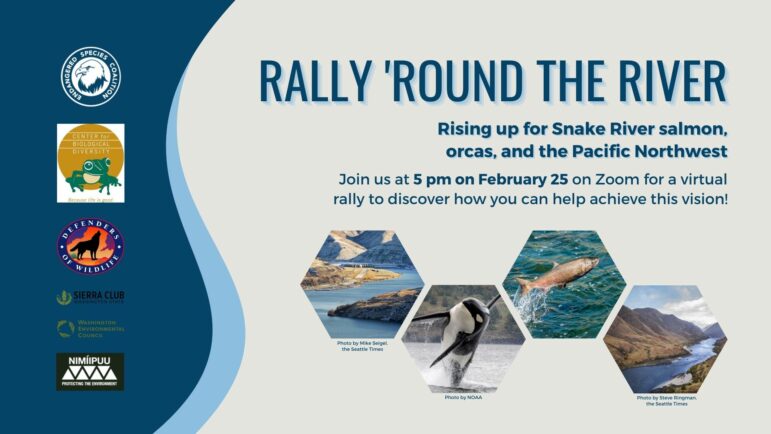 Almost 300 residents of Washington, Oregon, and Idaho came together, united, calling for their members of Congress to act on the opportunity before us. We have a unified government under President Biden that is debating how to spend $2-4 trillion on infrastructure investments and the Northwest Congressional delegation has more power today than they have in a generation. The Northwest has never been better situated to fund the removal of the four dams on the lower Snake River and invest in alternatives to the services that the dams provide, from energy to agriculture to transportation.

Attendees at the Rally ‘Round the River made signs and created a word cloud to demonstrate their support for a restored Snake River. Speakers included Elliott Moffett, Julian Matthews, and Luciinda Simpson, three enrolled members of the Nez Perce Tribe and board members of Nimiipuu Protecting the Environment. “When the creator was developing our land and our area for the Nimiipuu people, the salmon said they would give their life for us,” explained Luciinda Simpson, “In doing that, we said that we would protect the salmon. Breaching the dams is one way that I can see that we can protect the salmon.” 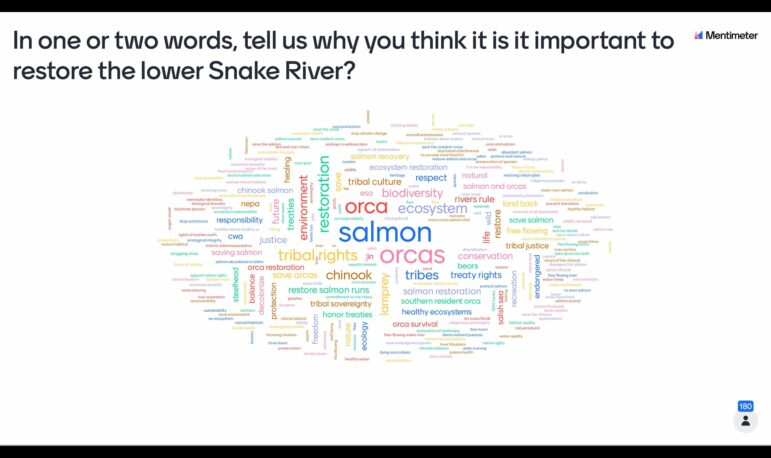 Solutions are being developed to breach the lower Snake River dams and keep the communities that rely on them whole. For instance, Rep. Mike Simpson (R-ID) introduced a $33.5 billion proposal in February to recover salmon across the region, including breaching the four dams. The framework is the first time a member of Congress is initiating a serious conversation about the clear need for dam removal. But there are aspects of the framework from Rep. Simpson that must change, such as exemptions to our bedrock environmental protections, like the Clean Water Act and the Endangered Species Act – the very laws that allow us to fight for the recovery of salmon and orcas – as well the extension of licenses for other dams in the Columbia Basin for up to 50 years and a 35 year moratorium on litigation relating to these dams and anadromous fish. Finally, the timeline for dam removal is ten years. We know that orca and salmon are on the brink of extinction; we need to begin their recovery process as soon as possible. That’s why we are calling on the support and leadership of Democratic members of Congress to propose a stronger solution that removes the lower Snake River dams without undermining the very tools that allow us to fight for the full recovery of salmon and orcas.

“Restoring the Snake River alone would make this the biggest salmon restoration project in history,” says Robb Krehbiel, Northwest Representative for Defenders of Wildlife. “Now is the time for us to come together and finally restore the lower Snake River.”