Let’s Get Rid of Regulations – Wait a Minute!

By Dr. Mark Rockwell
California State Representative
Endangered Species Coalition
To listen to Congress today, at least from one side, you would think that federal regulations are the source of our economic plight, and is the one major cause of our weak economy, and lack of recovery. After all, they claim, it is regulations that always get in the way of business activity, and prevent free enterprise from doing what they do best – create products and jobs. Of course, it seems to many that the focus of these attacks are on regulations that protect the environment, be it fish and wildlife (Endangered Species Act), or clean water and air (Environmental Protection Agency enforcement of the Clean Water and Clean Air Acts).
Well, let’s look back and think about why we have regulations in the first place. At times in our illustrious past we have seen the impacts of over-indulgence from business. In California, for instance, in the 1850s and the gold rush, miners literally destroyed rivers and streams, and even diverted huge quantities of water to wash away hillsides (Placer mining) to wash out and find gold. This action created huge siltation problems that destroyed water quality for farming, killed spawning fish and their off-spring, and caused flooding in the valley. Alas, the state stepped in and blocked this type of mining, but after the damage was done. Mercury was also used to extract gold, and today mercury contamination is a huge health risk to people and wildlife, more than 150 years later. State and Federal regulations on mining have stopped these impacts. 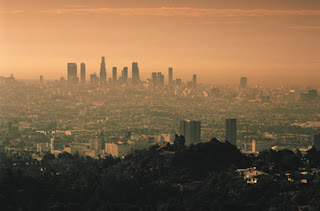 I can remember as a child growing up in the Los Angeles basin and the terrible smog created by pollution from cars and industrial activity. It was so bad that you could not see hills less than 1/4 mile away because of the smog. It caused huge health problems to residents, and heralded in the era of respiratory illnesses like asthma, bronchitis and other lung diseases. Additionally, whole forests in the local mountains began to die from the effects of the air pollution. Again, it was state regulations that began to mandate changes from the auto industry, and soot emitting business, that eventually helped to improve the situation , and reduce the killing impacts to people and vegetation.
Can anyone remember the river in Ohio (Cuyahoga River) that spontaneously ignited in flames as a result of the high level of combustible fluids poured into the river from industry? Time Magazine said, “Some river! Chocolate-brown, oily, bubbling with sub-surface gases. It oozes rather than flows.” It was a national headline item, and a national disgrace. People asked, “how could this happen in America?” Many rivers were so polluted that it was unsafe to swim in them, and it killed all the fish and other aquatic wildlife. The Chesapeak Bay, rivers around Pittsburg including the Ohio River, as well as many big cities in the Northeast all suffered from river pollution that was causing death and illness.
Do you remember the book, Silent Spring, by Rachel Carson? It was a book about pesticides in our environment that were causing the “silent” death of our wildlife, especially birds. A major focus was DDT, a pesticide used to kill mosquitos, but its impact was great on birds and wildlife. As it turned out, it caused bird egg shells to become thin and break in the process of incubation. As a result we nearly lost the Bald Eagle, our national symbol. Thanks to Rachel, we became aware of the impacts of man-made compounds in our world, their impacts on us, and the fish and wildlife around us..
So, what does that have to do with regulations? Well, it was public and Congressional awareness and outcry that lead to the development of federal laws to protect us from these types of harmful outcomes. Here are a few laws that were created for our benefit:
• Endangered Species Act (ESA) of 1973 – This law was created to keep us from actions that would lead to the extinction of fish, plants, animals and birds in our world. It does not block economic activity, but does call for evaluation before action is taken to understand what impacts would happen to fish and wildlife. It only applies to actions involving the federal agencies, and if the impacts are bad (lead to great harm) then the agency will recommend a “preferred” action so the harm can be reduced or avoided. The ESA does not block economic activity, but may require changes in a developed plan.
• Clean Water Act (CWA) of 1972- This law came from the “burning river” and other similar conditions primarily in the east, more industrialized areas of the country. It is administered by the Environmental Protection Agency (EPA), which is tasked with protecting public health impacts from pollutants released into our waterways.
• Clean Air Act (CAA) of 1963 and 1970 – Another law created by Congress as a result of worsening conditions in areas like Los Angeles, and other major cities, especially those where heavy industry was present. Much of the pollution in the air came from business and industrial activity, either directly from business themselves, or the products of those businesses. Again, it is the Environmental Protection Agency tasked with enforcing and creating protections for human health.
Do we need regulations? Well only if we want to be able to pass along a country that is suitable for our children and grandchildren. Only if we want our families to be able to live in a healthy place, with clean water and air. Only if we feel having birds, fish, bears, bugs, etc. is important to our lives, and the lives of our communities. There is little doubt that the American public has weighed in long ago on all this. With an over-whelming vote of confidence did the public agree that these agencies and the regulations used to protect us were necessary. Citizens agreed that protections of our fish and wildlife, water and air were all important to our wonderful country.
It is important to remember – regulations are there to protect us from abuses, be they for personal gain, or business advantage. Our collective health is worth the extra expense and effort required. Future generations, including our grandchildren, will thank us.

0 comments on “Let’s Get Rid of Regulations – Wait a Minute!”