For centuries, the grizzly bear has held its place in America’s heart as a symbol of the North American wilderness. Although they have a reputation for being fearsome predators, grizzlies are naturally reclusive creatures that like to keep to themselves more often than not. Inquisitive, intelligent, and undeniably fascinating, the grizzlies have more than proven their worth to conservationists nationwide.
Despite their formidable appearance, grizzlies are usually rather introverted. Except when breeding or raising cubs, they are usually solitary. When they are not resting or socializing, they’re on the hunt for food.  Grizzly bears are actually opportunistic omnivores – not true carnivores. In fact, only a very small percentage of a typical grizzly diet is fish and meat. The majority of it is comprised of insects and vegetation such as grasses, roots, berries, and even fungi. The grizzly bear’s excellent memory and acute sense of smell allow it to detect and remember where food is located – a very helpful survival skill that normally allows them to thrive in forested ecosystems. 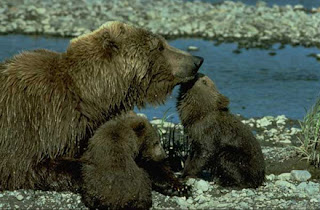 Most grizzly bears live for 20 to 25 years, and females reach sexual maturity between the ages of 3 and 8, although they have very low reproductive rates. Females generally produce a litter of 1-4 cubs, and each cub may have a different father. Cubs stay with the mother for at least 2 or 3 years, after which the mother may choose to mate again. Grizzly bear cubs are curious, active, and usually very playful.
Hibernation is a key element of the grizzly bear’s life cycle. During the late fall, as food becomes less available and temperatures grow colder, grizzlies prepare for hibernation by eating excess amounts of food and storing the energy away. Then, they retreat into a den and essentially become inactive. During hibernation, grizzlies do not have to eat, drink, or excrete waste. They fully awaken in the spring, when environmental conditions are more suitable and food is more readily available. This tactic allows them to survive in a way that other animals cannot.
Grizzly bears are very important keystone species to the ecosystems they reside in. One of their main ecological roles is that of a seed disperser. When a bear consumes something seeded, the seeds pass through its digestive system and are excreted along with its waste, which itself acts as a fertilizer. This allows plants to indirectly transfer their seeds to new locations, thereby furthering genetic diversity. Even in the process of looking for food, bears mix the soil and act as an important component of the nitrogen cycle.
Unfortunately, these bears were all but wiped out during the late 19th and 20th centuries. With an increasing number of humans living in North America, the species has been put into a precarious situation south of the Canadian border. Due to the increasingly aggressive construction of roads and human habitation, grizzly bear habitats have been substantially fragmented, reduced in size and number, or have been degraded in other ways. Since many habitats are disconnected from each other, grizzlies are not able to migrate to new areas to find better sources for food. Their total population in the lower 48 states has fallen from 50,000-100,000 in pre-colonial times to just several hundred individuals over a few centuries. However, thanks to the Endangered Species Act’s protections and funding, combined with the dedicated conservation work of state and federal bear biologists, the bear population in the lower 48 has recently rebounded to around 1,500 today, with most living in and around Yellowstone National Park and Montana’s Continental Divide.
Conservationists have known about the grizzly bear’s situation for decades. In 1975, the species was listed as ‘Threatened” under the Endangered Species Act, which afforded it a considerable amount of protection from hunters and other human threats. Recovery efforts were put into place soon after. The U.S. Fish and Wildlife Service completed their plan in 1982, and a revised copy was finalized in 1993. The plan stated that it would focus on improving human-bear relations, mitigating damage to grizzly habitats, and move populations from one ecosystem to a more suitable one if necessary. The Service’s efforts have largely been successful.
In addition, a specialized organization called the Interagency Grizzly Bear Committee was formed in 1983.  Its membership is comprised of a number of other organizations, including the US Fish and Wildlife Service, the USDA Forest Service, the US Geological Survey, and the National Park Service. The IGBC focuses on six major ecosystems which grizzlies are known to be integral to: Yellowstone, the Northern Continental Divide, Selway-Bitteroot, Cabinet-Yaak, Selkirk, and North Cascades. By honing in on which habitats are most crucial and how to support bear populations there, the IGBC is well on its way to securing the grizzly’s place in the United States.
Despite these agencies’ efforts, grizzly bears are facing a new threat these days: climate change. One striking example of how this global phenomenon affects them is  case of the mountain pine beetle. Due to global warming, many parts of the U.S. are experiencing shorter and warmer winters at higher altitudes. Essentially, this allows certain species of insects to live longer at these altitudes, such as the mountain pine beetle. This species of beetle inhabits several species of pine tree, and has recently begun to kill off large swaths of the high-elevation, Whitebark Pine, particularly in the greater Yellowstone region. The beetle effectively destroys the trees that they live off of by boring numerous holes in them.
During the fall, the nuts of the Whitebark Pine are a major food source for grizzly bears, so when trees start dying out at higher altitudes the bears are forced to move to lower ground to find other food sources. This is where they face the greatest threat of being in an encounter with humans. Since human conflict is the number one cause of premature grizzly bear mortality, conservationists are concerned that conflicts (and dead bears) may increase as grizzly bears spend more time at lower elevation looking for food.  Since bears are one of the slowest-reproducing mammals on the planet, a significant increase in bear mortality could potentially threaten recovery efforts. Wildlife officials are currently assessing the potential impact of the Whitebark Pine decline on the greater Yellowstone population of grizzly bears, which is scheduled for delisting in 2014. 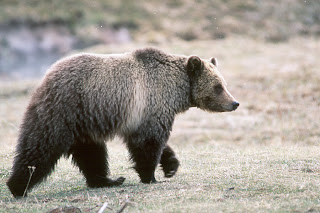 Since most bear deaths are a result of run-ins with humans, it is important that we learn how to coexist with these wonderful creatures. There are

numerous measures you can take to stay safe in bear country and reduce the chance of a dangerous encounter. Whether you are camping or have a home close to grizzly communities, always remember to leave garbage and other odorous materials indoors or in bear-resistant containers. Try not to camp close to bear food sources, such as berry bushes, and store your own food in proper containers that lessen the odor. Be cautious when cooking, and cook away from your tent to avoid contaminating it with food smells. If hunting, do not leave your carcasses out in the open—move it away from the gutpile and secure it by hanging.

Do not traverse bear country alone, and never provoke or threaten a grizzly deliberately. It is also important to make some noise while hiking, to avoid surprising a bear. Finally, be sure to purchase a canister of “bear pepper spray” if you plan on hiking or staying in areas populated with bears. Bear spray is specifically designed to deter bears if they come into contact with it, similar to how pepper spray works on humans. The spray should only be used in the event of an actual charge or other close encounter, not as a preventative measure.
Grizzly bears are a precious asset to the ecology of North America, and they are certainly not a species we can afford to lose. With patience, care, and peaceful coexistence, it is very possible that we will recover their populations and secure a place for them in the future. For our sake and theirs.

0 comments on “Saving a Place for America’s Great Bear”