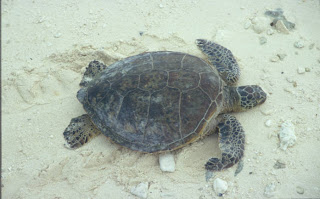 As part of our efforts to raise awareness of the increasingly disastrous effects of the BP Oil spill on Gulf wildlife, we’re profiling several Gulf species that are threatened or endangered. Today we’ll have a look at the green sea turtle.

Green sea turtles are endangered along their breeding grounds in Florida and along the Pacific coast of Mexico, other populations are listed as threatened. The green sea turtle is in decline largely due to poaching for their eggs, meat, and shells and becoming entangled in shrimp nets and other fishing equipment. They’re further disturbed by development related habitat loss in their nesting areas and associated artificial lighting. Hatchlings attempting to make their way to the ocean by seeking the bright horizon become confused by street lights and electronic signs, leading them astray and away from the ocean waters.

Green sea turtles spend their lives in three different habitats: oceanic beaches for nesting, convergence zones in the open ocean, and feeding grounds in coastal areas. Each sea turtle has unique facial markings, similar to human fingerprints. They can swim remarkably long distances, sometimes migrating up to 1400 miles between their feeding grounds and nesting site. They can live for up to 80 years, grow to a maximum size of about 4 feet and weigh up to 440 pounds. Adults are unique among sea turtles in that they’re herbivores and rely on sea grass and algae to survive.

Their diet, range and habitat are making them unfortunately vulnerable to the oil fouled waters and coasts of the Gulf. As of July 30th, 498 deceased sea turtles had been collected by USFWS in the Gulf region, many of them green sea turtles. Until a recent court settlement, BP had been burning them alive in their efforts to dispose of the errant oil. They continue to swim amid the oil and dispersants still at sea and consume grass and algae that’s in some cases oil coated.