This Earth Day, I and 6 of my closest cetacean friends took the train to the National Mall and marched to the White House to raise awareness of the IWC proposal to end the 24 year strong ban on commercial whaling. 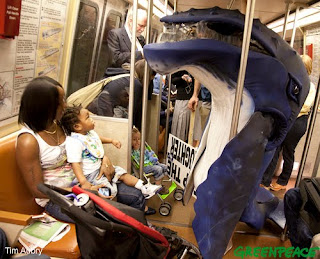 Endangered Species Coalition Members Greenpeace, the International Fund for Animal Welfare and the Earth Day Network organized an Earth Day Rally on the Mall to protect whales and demonstrate our unified opposition to the proposed deal to end the ban on commercial whaling.

The proposal, unveiled on Earth Day, would end the ban on commercial whaling that has been in place since 1986. In a recently released statement,New Zealand’s Foreign Minister has described it’s provisions as “offensive,” “unacceptable,” “inflammatory” and “not a basis for negotiations.” 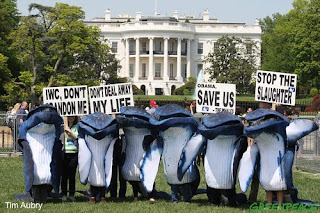 The proposal will be voted on at the June meeting of the International Whaling Commission in Agadir, Morocco. If passed, it would legitimize commercial whaling by suspending the moratorium in exchange for loosely enforced quotas based on recent catch data, not sound science. The proposal would leave enforcement of these quotas to individual nations, exposing it to great potential for fraud and mismanagement. It would give Japan license to kill whales in the Southern Whale Sanctuary in addition to it’s coastal waters, putting sensitive whale populations and non target species at great risk.

President Obama was unequivocal about this issue while campaigning for his office. He said in a reply to a Greenpeace questionnaire that ““As president, I will ensure that the U.S. provides leadership in enforcing international wildlife protection agreements, including strengthening the international moratorium on commercial whaling. Allowing Japan to continue commercial whaling is unacceptable” We need to hold him to that pledge. 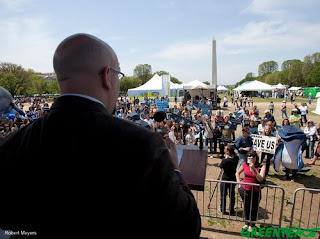 So it is in that spirit that the humpbacks, I and several hundred others rallied on the Mall. Fred O’Regan of IFAW, Greenpeace’s Phil Radford, HBO True Blood actress Kristin Bauer and others spoke at the rally in defense of whales, and later advocated on their behalf in meetings with the President and Members of Congress.

Seizing the energy from the rally, we took to the streets and marched to the White House, where President Obama was just returning from a trip to New York.

We gathered outside the White House and delivered our message on behalf of whales: Stop the sellout! 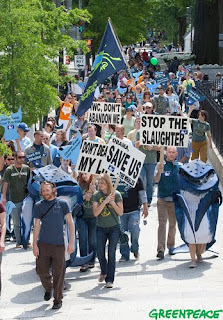 You can take action on behalf of endangered whales too! Tell President Obama that now is not the time for a compromise on commercial whaling.

To find out more about ways you can help whales, take action at our member organization’s websites: IFAW
and Greenpeace.

The Earth Day festivities weren’t over yet though. The main event was Sunday night to allow people who couldn’t get free at noon on a Thursday to come out . The Earth Day Network organized the Climate Rally on the Mall and invited a spectacular lineup of speakers and entertainment to get the word out. The Roots, Sting, Bob Weir, John Legend, Joss Stone, Passion Pit and others took the stage in humid conditions with thunderclouds gathering and delivered a solid 8 hours of music. A strong contingent of speakers including EPA Administrator Lisa Jackson, Congressman Ed Markey, Trudie Styler, NASA’s Dr. James Hansen, Rev. Jesse Jackson, Green For All’s Phaedra Ellis-Lamkins and filmmaker James Cameron rallied the 100,000+ in attendance to carry the movement forward and pressure the Senate to pass a strong climate bill. 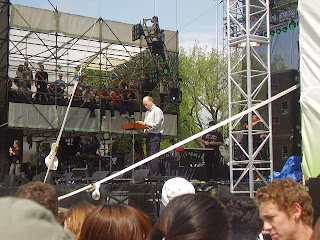 If you weren’t able to make it to D.C., you can still make a difference and make your voice heard. Take action through the links above and be part of our own Earth Day Action on behalf of endangered species by asking your Senator to support a strong climate bill the includes adequate protections for wildlife in a warming world.