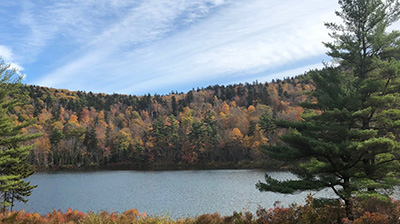 composed primarily of local native plants.
Local advocacy group Green & Open Somerville has been collaborating with Katjana Ballantyne and other city councilors for several years to author the ordinance. It requires 100% native plants along rivers, the Somerville Community Path, and Metro Train Extension, 75% native species in parks, and 50% native trees along streets. Native plants are defined in part as “ a plant that is a part of the balance of nature that has developed over hundreds or thousands of years in a particular region or ecosystem.” For the full language of the ordinance, including definitions, click here.
A Green & Open Somerville press release explained why the law is so important:
“Native plants evolved to live in this ecosystem over millions of years. They provide food and shelter to butterflies, moths, birds, bats, bees, and many other fauna that also evolved … here. Those animals in turn feed larger ones, and on up the food chain. Plants are the foundation of the food web, and without them … life as we know it would disappear. …While [introduced plants] are often beautiful in our gardens, they are, at best, not part of the food web, taking the place of those that were. At worst, they actively take over the ecosystem … pushing out … native plants.”
The press release also noted that planting natives along rivers, roads and railways is particularly important
“[W]e’re starting to get people to understand that these corridors will provide critical habitat and the ability [for wildlife] to move from one safe space to another,”
The ordinance does not affect private property.
Las Vegas Cutting Back on Lawns
Meanwhile the city of Las Vegas is taking steps to rid itself of at least some of its vast and very thirsty turfgrass acreage. 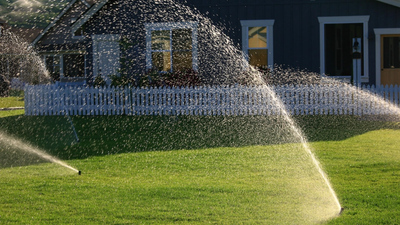 Las Vegas-area water officials have spent two decades trying to get people to replace greenery with desert plants, and now they’re asking the Nevada Legislature to outlaw roughly 40% of the turf that’s left.
Las Vegas went a record 240 days without measurable rainfall in 2020. Water officials are now asking the Nevada Legislature for a first-in-the-nation policy banning grass that nobody walks on.
The Southern Nevada Water Authority estimates there are almost 8 square miles of  “nonfunctional turf” in the metro area – grass that no one ever walks on or otherwise uses in street medians, housing developments and office parks. The Authority says ornamental grass requires four times as much water as drought-tolerant landscaping like native cactus and other succulents. They estimate turf replacement can save the region roughly 15% in annual water consumption or about 14 gallons per person per day.
Banning ornamental grass will primarily affect road medians as well as common areas maintained by homeowner associations and commercial property owners.
This is a completely new phase in the struggle to conserve water by replacing thirsty turf with native and drought tolerant plants. No state or major city has tried to phase out certain categories of grass permanently.
Other desert cities are not yet as forward thinking. Salt Lake City still requires yard and median greenery. Phoenix, where some neighborhoods still use flood irrigation, has never offered grass removal rebates.
See this recent NPCC News for more information on the ecological and economic costs of turfgrass lawns.
Latest Native Plant Month – Arkansas, 2021!
Finally, on the heels of the historic adoption of April as National Native Plant Month by unanimous action in the U.S. Senate, on April 5 Arkansas established May as AR native plant month.  Learn more about AR Native Plant Month at the Arkansas Native Plant Society
These initiatives are part of a growing trend of public and government support for native plants in recent years. As the climate and extinction crises accelerate, federal, state and local decisionmakers are starting to realize that one avenue they can turn to for cost effective  – and popular  – solutions, is the conservation and restoration of native plant communities. These so called Nature Based Solutions are increasingly being used worldwide as central components of our response to climate and extinction related problems such as drought, severe storms, floods and declines of birds and pollinators.
Further Information
Photos: Native Forest, New Hampshire, (c) Emily Roberson; Lawn, Public Domain
________________________________________
Emily B. Roberson, Ph.D.
Native Plant Conservation Campaign
Native Plant Society of the United States

[email protected]plantsocieties.org
#SavePlantsSaveThePlanet
The mission of the Native Plant Conservation Campaign is to promote the conservation of native plants and their habitats through collaboration, research, education, and advocacy.
Sign up for NPCC News!       Like us on Facebook!         Donate!
Please forward this message to any interested individuals or organizations.